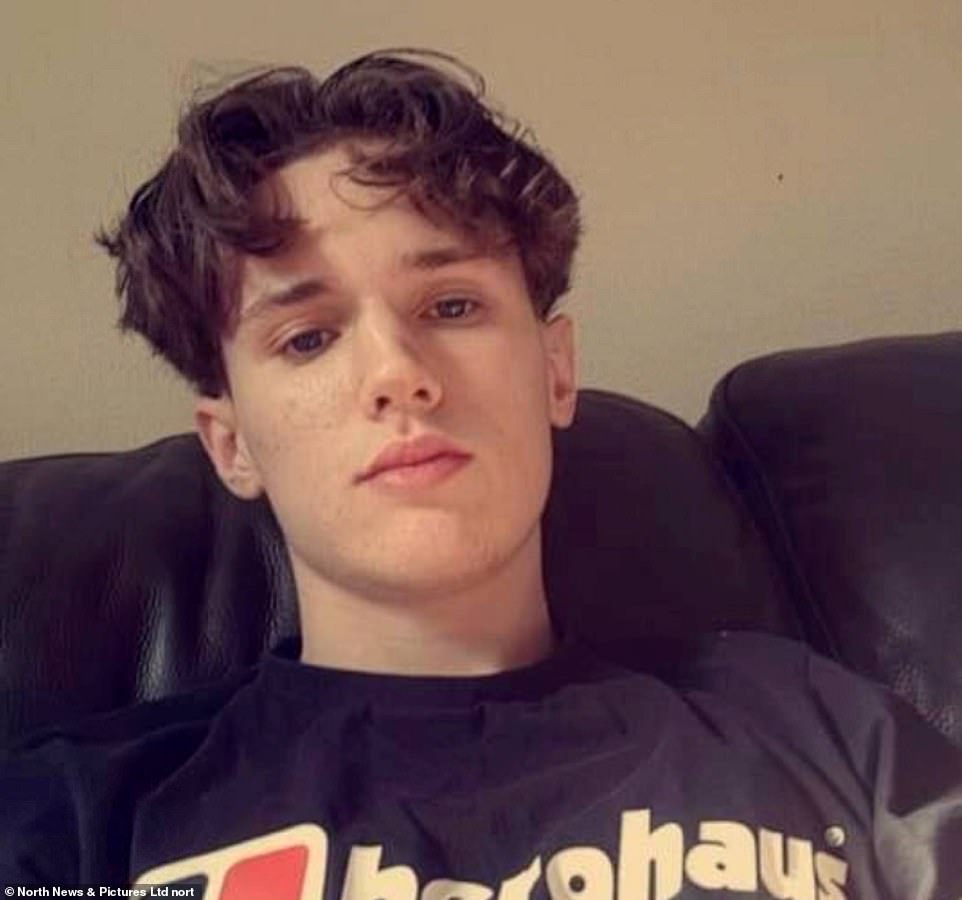 Ten teenagers who murdered an 18-year-old ‘solely for excitement and pleasure’ after attacking him at random as he walked home from a funfair were today sentenced to life.

Jack Woodley was fatally stabbed after being ‘surrounded and isolated’ by a gang of youths who chased him down an alleyway and attacked him ‘like zombies attacking an animal’ in Houghton le Spring, Sunderland, last year.

The victim, who had been due to start a job the Monday after he was attacked and was on the way to pick up keys for a new flat, was punched, kicked, stamped on, and stabbed with a 25cm ‘Rambo style’ knife during the attack on October 16.

Prosecutors said the group had gone out ‘looking for serious trouble that day’ and tried to ‘create conflict’ with Mr Woodley at the festival as they ‘looked for any excuse to attack someone’.

One of the teenagers first put Mr Woodley in a headlock and punched him, before the others ‘joined in’, the court heard. Jurors were told one of them was heard shouting ‘get the chopper’ – referring to the knife – in mobile phone footage of the incident.

Today, the 15-year-old who inflicted the fatal wound by stabbing Mr Woodley in the back was detained for a minimum of 17 years.

Witnesses described Mr Woodley as visibly ‘so scared’ as he curled up into a ball and received a torrent of kicks to his face and body from the attackers, who acted like a ‘herd of lions’.

Judge Rodney Jameson QC sentenced the other nine defendants, aged between 14 and 18, to minimum terms of between eight and 15 years’ detention. He told them that if they are then released, they will remain on licence for the rest of their lives. He said they had shown ‘regret’, but ‘regret is not remorse’.

The total minimum terms for all the defendants adds up to 124 years and six months.

Jack Woodley was fatally stabbed after being ‘surrounded and isolated’ by a gang of youths who chased him down an alleyway in Houghton le Spring, Sunderland, last year

The scene in Houghton-Le-Spring where the attack took place

Nine of the youths, who cannot be named for legal reasons, had denied murder and manslaughter.

One pleaded guilty to manslaughter, admitting he stabbed Mr Woodley but denying he intended to kill him, Newcastle Crown Court heard.

Prosecutor Mark McKone QC had told jurors that Jack and the gang of youths had been at the funfair all evening, before the attack took place outside of The Britannia Inn pub in Houghton.

Mr McKone said: ‘The attack took place outside the pub but the group also chased Jack down an alleyway at the side of the pub. Many people in the pub saw the attack.’

At the start of the trial in March, prosecutor Mark McKone QC said that while only one youth stabbed Mr Woodley, the other nine were guilty due to ‘the concept of joint enterprise’.

A jury convicted all 10 defendants of murder in June.

Nine of them intend to appeal against their convictions, the Crown Prosecution Service confirmed this week.

Sentencing the group, the judge said: ‘No sentence can restore Jack to his family and loved ones, or reduce the pain they will endure now and in the future.

‘It may seem unfair that you will be able to live at liberty while still young men, while Jack cannot because of what you did.’

Judge Jameson said the group had attacked Mr Woodley ‘solely for the excitement and pleasure of inflicting serious injury on an entirely innocent and randomly selected stranger’.

The judge told the defendants the violence inflicted on Mr Woodley ‘though short-lived, was appalling’ and all of them ‘played a part in causing Jack’s death’.

He said six of the teenagers had given evidence during the trial, but none ‘was prepared to tell the truth about what the others did’.

He told them: ‘You decided to put the interests of yourself and your co-defendants before those of Jack and his family. You did everything you could to deny them justice.

‘I’m sure you do regret what happened for many reasons, but regret is not remorse.’

Judge Jameson told the teenager who stabbed Mr Woodley: ‘I have concluded that you intended to kill when you inflicted the second stab wound. I accept that intention may have been formed in the heat of the moment.

‘It is, however, that sort of escalation that can occur when violence is carried out mob-handed and when armed with a deadly knife.’

During the trial, Mr McKone said Mr Woodley was leaving the Houghton Feast funfair when the defendants, who he did not know, ‘surrounded and isolated’ him.

One of the teenagers first put Mr Woodley in a headlock and punched him, before the others ‘joined in’, the court heard. Jurors were told one of them was heard shouting ‘get the chopper’ – referring to the knife – in mobile phone footage of the incident.

Jack, who had been due to start a job the Monday after he was attacked and was on the way to pick up keys for a new flat, was punched, kicked, stamped on, and stabbed with a 25cm ‘Rambo style’ knife during the attack on October 16

‘Don’t do it’: Jack’s devastated mother warns against carrying a knife

After the hearing Jack’s mum Zoe McGill said: ‘We always used to call him our cheeky chappy, blue-eyed boy.

‘He used to light up any room he was in. He hated to be serious, he always wanted to make a joke. He was happy go-lucky and very adventurous.

‘Things were really coming together for Jack and he was making his mum proud. We were just numb, I remember screaming. I think I was just in shock.

‘The days after his death were horrific. I just remember waking up and looking out my bedroom window and I kept saying to myself over and over, it was just a bad dream.

‘I kept thinking of my son in a morgue. Things that you never would expect to go through as a parent, I think I was just unable to even process some of it, to take it in.

‘I never want anyone else to ever go through that – to go through this. No sentence will make a difference but I hope it sends a strong message to other kids, to stop this happening to other families.

‘My message? Don’t do it. Don’t carry a knife, don’t put yourself in that position where you might possibly use it.

‘And don’t think that just because you’re not the one carrying the knife that you can’t be prosecuted – because you can and Jack’s case has proved that.

‘There were children there that night that kicked and punched Jack, held him down, swarmed him and they think that because they didn’t hold the knife they’re not guilty of murder.

‘But they involved themselves and they chose to involve themselves. You don’t need to be the one holding the knife to contribute to a death or to be found guilty of murder.

‘There is never an acceptable excuse to carry a knife, and don’t hang around with those who do.

‘If you know someone has a knife run, tell – don’t involve yourself, don’t be part of the violence because you will ruin your life and other people’s lives too.’

Speaking during an earlier court hearing this week, Zoe said the whole family would be ‘forever haunted about how horrific Jack’s injuries were’.

Ms McGill said that Jack had been looking forward to the future, and she added: ‘This has ruined our family’s lives and life will never be the same again without Jack.’

In an earlier statement, she told the court: ‘Jack was my reason to live and succeed in life. From the moment Jack was born he brought light and love to us all.

‘In the months before October, Jack had sat and passed his English and Math Level 3, CSCS Operatives Card, Forklift Truck License and had secured a job with Amazon which he was due to start the Monday after his death.

‘Jack had also secured his own accommodation and had received the keys for this on the day he was attacked. We were all very proud of Jack and this should have been a very exciting time in his life.

‘The devastation of losing Jack is immense and far reaching. The trauma of reliving this whole incident over a long trial has had a devastating effect us all. We cannot see a way of recovering from this.

‘We feel imprisoned by our grief and trauma. No parent, loved one or friend should suffer someone going to a fair and them forever.

‘We will never be able to share treasured family moments with our cheeky chappy blue-eyed boy ever again.’

The second teen, who is 16-years-old, was the first to attack Jack and “held him in a headlock” during the attack. He was described as having “average intelligence” and was sentenced to serve a minimum term of 13 and a half years.

The third teen, 15, had one previous conviction for burglary and went to collect the knife with the youth who inflicted the stabs. He was sentenced to a minimum term of 15 years.

The fourth teen, who is now 18-years-old, had attended the fair in possession of a knuckle duster, but did not hit Jack with it. Despite being one of the oldest, the court heard he was of low intelligence and was not a leader.. He was sentenced to serve a minimum of 15 years.

The youngest of the defendants, a 15-year-old, was said not to have attended the fair wanting to fight. The court heard he may have been called a “girl” if he didn’t attend and was said to have a learning disability. He was sentenced to a minimum of eight years.

The sixth teen, also 15-years-old, had drank vodka and smoked cannabis on the night of the murder and was heard to shout “get the chopper out”. The court heard the youth’s parents and family had also been involved in criminality. He was sentenced to serve a minimum of 13 years.

Supporters gathered outside Newcastle Crown Court today which a banner that read ‘Justice 4 Jack. Life for a knife’

The seventh teen, 15, had attempted to fight Jack outside a nearby dentist surgery, and was said to have a low IQ and was “easily led”. He has problems with mental health, “anger management” and had been involved in “some bad behaviour” while in custody. He must serve a minimum of 10 years.

The eighth teen, who is 16-years-old, became involved in the attack on Jack at a “late stage” and cried in the dock as he was told he must serve a minimum of 11 years.

The ninth youth, 16, had written a letter to the judge describing how he is determined to turn his life around in the future. He must serve a minimum of 11 years.

The tenth teen, the second 18-year-old, was said to be “lacking in self confidence”, has a low IQ and ADHD. However, the court was told he was the most “heavily disguised” of the lot at the time. He must serve a minimum of 11 years.