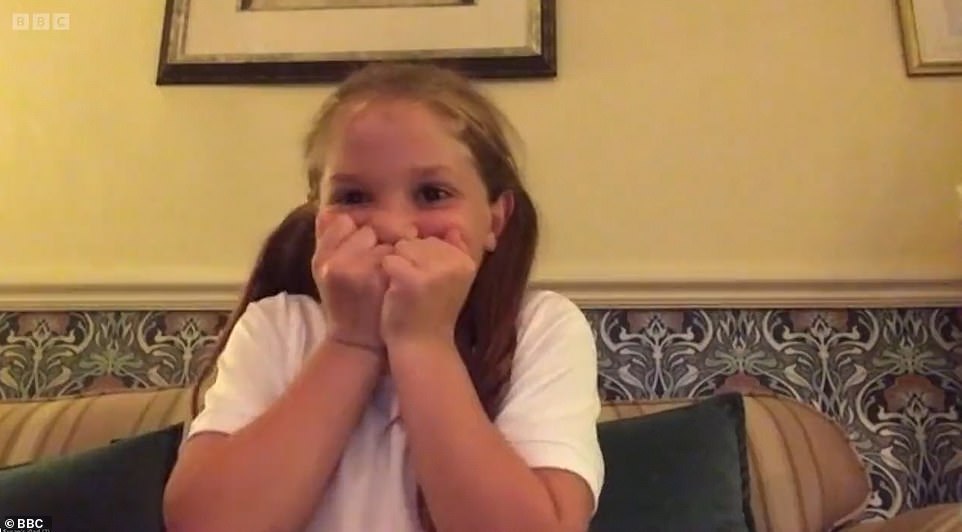 A young girl who stole the nation’s hearts with her celebratory dance moves during the Lionesses’ Euro 2022 victory against Sweden has won tickets to the final this Sunday.

The pair had been discussing how excited Tess was to watch England’s title clash against Germany from home, when Gabby asked her: ‘How about being in the stadium with us?’

Tess, from Wakefield, West Yorkshire, covered her mouth in shock and bounced up and down on her sofa when Gabby confirmed she had a ticket for both her and one relative – before inviting her to come to the studio and meet the team.

Gabby added: ‘I think the Lionesses need your support and we certainly need to see your singing again.’

The schoolgirl, donning her England football shirt, shouted: ‘Thank you, thank you!’ as she put her hands on her head in disbelief.

The pair had been discussing how excited Tess was to watch England’s title clash against Germany from home, when Gabby Logan asked her: ‘How about being in the stadium with us?’ (moment pictured)

The schoolgirl, donning her England football shirt, shouted: ‘Thank you, thank you!’ as she put her hands on her head in disbelief

It comes after Tess captured the mood of the nation during the semi-final clash at Sheffield’s Bramall Lane when she was picked out by a camera operator belting out the Neil Diamond anthem Sweet Caroline.

Speaking to the BBC yesterday morning she said: ‘Going through my mind was, when I’m older I want to be a footballer.

‘I was looking at how they were celebrating and thinking of how I was going to celebrate.

‘Normally they look at the big screen and, you can see, I’m on telly, but didn’t know I was being filmed!’

Ian Wright also appeared on the show and said her celebration would go down in history.

He commented: ‘When I saw Tess celebrating yesterday, I thought, those scenes are iconic scenes.

Tess Dolan, 8, has become an Internet sensation after being filmed dancing at the England Women’s game last night in Sheffield

Schoolgirl Tess, eight, went viral after her celebrations went live to the nation on the BBC

Young England fan Tess, 8, spotted going wild to Sweet Caroline at Euros had no idea she was being filmed: ‘It was crazy’

‘The girls, when they see that, they will be inspired by that. When they were younger, they couldn’t have the dream you are having right now.’

Tess, of Knaresborough, North Yorkshire, was among the 28,000 frenzied fans inside Bramhall Lane to cheer England to victory on Tuesday night.

But despite a dominant performance on the pitch – including a cheeky 68th-minute back-heel by her favourite player Alessio Russo – Tess was the real star of the show.

As England gaffer Wiegman conducted her post-match interview with a TV reporter, cameras panned to the crowd and showed Tess’s now-iconic dance moves.

Within minutes, her mother Sam Dolan’s phone was ‘going mental’ from pals who had seen the clip on tv and across social media, where it quickly went viral.

Such was the popularity of the clip, she appeared on breakfast TV yesterday where she was interviewed by England and Arsenal legend Ian Wright.

Tess said: ‘It was the best football match I’ve been to so far.

‘It was amazing. I didn’t know I was on tv until my mum got lots of text messages from people. I was just dancing and enjoying myself.

‘I was singing Sweet Caroline and then my mum started getting messages.

‘It’s really weird to be on the tv, but it feels amazing.’

The Lionesses won 4-0 to set up a date against Germany – who beat France 2-1 last night – in Sunday’s Wembley final as they bid to win a first-ever European Championship title.

Manchester United forward Alessia Russo scored England’s third, threading her backheeled shot through the legs of two Sweden players and into the net.

England threw off a shaky start in the semi-final when Mead turned sharply in the box and fired home after 34 minutes.

They doubled their lead through Lucy Bronze’s header not long after the restart and Russo’s audacious effort was followed up by Fran Kirby’s chip of Sweden keeper Hedvig Lindahl.

No striker wants to be a super sub, but so far it is working to perfection for England forward Alessia Russo.

The Manchester United player has come off the bench in all of the Lionesses’ Euro 2022 group matches and is now the joint-second top scorer at the tournament.

With four seamless goals, fans are referring to the 23-year-old as ‘Lessi’, likening her to Argentina footballer Lionel Messi – Often considered the best player in the world.

Russo has previously played for Chelsea, Brighton and Hove Albion and North Carolina Tar Heels, and has represented England at all age groups.

Born in Maidstone in Kent, Russo rose through the ranks to become a star in women’s football – before her mind-bending backheel goal helped the Lionesses smash Sweden out of Euro 2022 last night.

Russo is of Italian descent after her Sicilian grandfather moved to England in the 1950s. Her father Mario, played non-league football for the Met Police while her brother Giorgio played non-league for Ramsgate in Kent. Meanwhile, her youngest brother Luca attended the University of Missouri on a track and field scholarship.

After playing for Bearsted Girls under 10’s as a child, Russo began her career at Charlton Athletic’s centre of excellence before joining Chelsea’s development squad.

With four seamless goals, fans are referring to the 23-year-old as ‘Lessi’, likening her to Argentina football star Lionel Messi – Often regarded the best player in the world

After playing for Bearsted Girls under 10’s as a child, Russo began her career at Charlton Athletic’s centre of excellence before joining Chelsea’s development squad

Russo posted a picture alongside her mother, father and brother on social media and captioned the image: ‘Another special week’

Appearing once at a first-round Continental Cup match in 2016, Russo then moved on to Brighton on 5 February 2017, where she scored three goals in seven games.

Russo then moved to the United States in 2017, joining college soccer side North Carolina Tar Heels. She made an incredible 57 appearances in total before announcing she was gibing up her final year pf college in August 2020 due the ongoing Covid-19 pandemic.

She scored 28 goals in total and earned a United Soccer Coaches first-team All-America selection – becoming the first Tar Heel to make the first team since Crystal Dunn in 2013, and was named ACC Offensive Player of the Year.

A month after leaving the US, Russo signed a two-year contract with her favourite club, Manchester United where she won her first senior international cap in the final game of the 2020 SheBelieves Cup.

In 2006, Russo was a mascot for her future United manager Casey Stoney, who was captain of Charlton Athletic while Russo was at the London club’s Centre of Excellence.

In November 2021, Russo suffered a calf injury and posted an image to her Instagram telling fans: ‘Tough times don’t last. Road to recovery has begun’

Russo was initially a training player, but was later added as an injury replacement for team member Lucy Bronze.

She made her debut three days later as a half-time substitute in a 5–2 league victory over Birmingham City, registering an assist.

By October 2020, Russo was nominated for WSL Player of the Month – with three goals and one assist in three appearances.

At United, Russo has scored 12 times in 26 appearances as the club have established themselves as a force in the Women’s Super League.

Last season, she seamlessly led the team in goals with 11 goals in 30 appearances in all competitions and was named the inaugural winner of the team’s Players’ Player of the Year award.

She scored her first international goals, a hat-trick in a national record 20–0 victory over Latvia during 2023 World Cup qualifying match and it was named the fastest by any England player in history coming out at 11 minutes in total.

It also paved the way for her to be named in Sarina Wiegman’s England squad for UEFA Women’s Euro 2022.

Last night, Wright likened Russo to Argentine great Lionel Messi, saying: ”Lessi’, not Messi, for what she [Russo] has done when she comes on. I don’t know what she has to do to start a game.

‘The improvisation is fantastic. When she came on she instantly made an impact. She links play. I’m not sure what more she needs to do to start.

‘When you look at Ellen White’s contribution over the years you can’t question it. But she hasn’t done enough in this tournament.

‘This girl [Russo] is doing it. I don’t think Wiegman will change it.’

Wiegman herself said: ‘You must have so much courage to do such an unpredictable and phenomenal thing like that, no one could react to it. That was so nice to watch.’

Many fans just could not get their heads around the Manchester United forward’s goal, with one Twitter user saying: ‘Just watching this on a loop for the next 5 days’

A second fan echoed the sentiment, adding: ‘That was ridiculous!!’

Another user added that it was likely the best goal we would see all year, simply stating: ‘Goal of the year.’