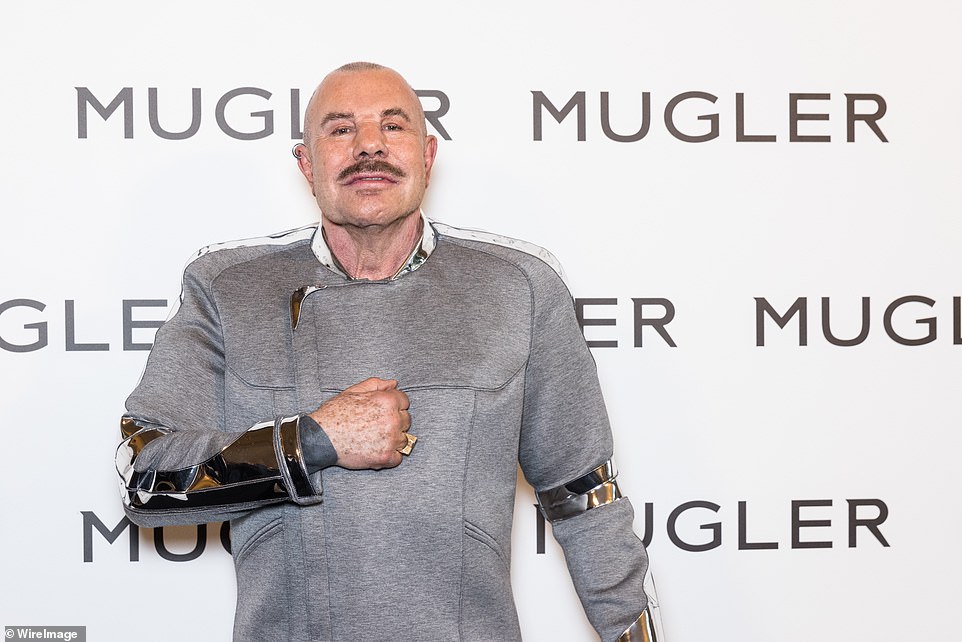 Iconic French fashion designer Thierry Mugler, whose designs were worn by entertainment royalty from Kim Kardashian to Lady Gaga to Beyonce, is dead at the age of 73.

‘#RIP We are devastated to announce the passing of Mr Manfred Thierry Mugler on Sunday January 23rd 2022,’ the post read. ‘May his soul Rest In Peace.’

His cause of death is not yet known.

Mugler – born Manfred Thierry Mugler on December 21, 1948 in Strasbaorg, France – dressed the biggest names in fashion and showbiz, even coming out of retirement in 2019 to dress Kardashian for the Met Gala.

‘He envisioned me as this California girl stepping out of the ocean, wet, dripping,’ Kardashian said at the time.

Iconic French fashion designer Thierry Mugler, whose designs were warn by entertainment royalty from Kim Kardashian to Lady Gaga to Beyonce, is dead at the age of 73

Mugler, seen at the dress rehearsal of his show ‘The Wyld – Not of this world’ in October 2014

Mugler, seen here in Paris in July of 1992 at a fashion show

Other famous names dressed by the Frenchman include everyone from icons like David Bowie, George Michael, Cindy Crawford and Sharon Stone to modern stars like Cardi B, Katy Perry, Rihanna and Bella Hadid.

His impact continued even in the week prior to his death, as Twitter obsessed over Alexa Demie’s character Maddie seen trying on one of Mugler’s dresses in an episode that aired on January 16.

After his retirement, Mugler worked as an artistic adviser to Beyonce, including in designing the costumes for her ‘I Am…’ world tour in support of the album that unveiled the character of Sasha Fierce.

Mugler was also famous for his line of perfumes, which are sold to this day. His most recent fragrance, Angel Nova, was released in June 2020.

He made his name largely in the 1980s and early 90s, with his designs used everywhere from the runway to stage shows and even music videos such as George Michael’s 1992 hit ‘Too Funky.’

Kardashian, seen here with Mugler at the opening of an exhibition in Montreal, was part of a revival of his designs in 2019

The designer also helped pave the way for transgender models, as Mugler used them in his stage shows as far back as 1984.

His first perfume, Angel, released in 1992 and was said to be preferred by Hillary Clinton and Barbara Walters.

He began to look different in recent years due to a combination of a series of accidents that forced him to get facial reconstruction surgery and a desire to reinvent himself.

Mugler said in 2017 that his body was constantly under construction.

‘I had a facial reconstruction following a serious gym accident that completely knocked my face down,’ he said.

‘There came a time when I said to myself: let’s put things back in order, to go further and higher.’

The New York Times said Mugler, who began going as ‘Manfred’ again in the 2010s, ‘transformed his body with an extreme regimen of diet, exercise and what is apparently plastic surgery into the 240-pound spectacle of muscle and nipple and tattoo.’

According to Vulture, Mugler ‘was best known for his sculptural use of tailoring. He became famous internationally for his broad-shouldered, 40’s-inspired women’s suits and highly themed fashion shows.’

He retired from fashion in 2002 before his brand was set to be shut down, but remained an influence on fashion for the next two decades.

Mugler, seen here at one of his earliest shows in 1979 in Paris

One of his most famous gowns was Demi Moore’s iconic dress from the film Indecent Proposal.

He also published multiple books – his first photography book ‘Thierry Mugler: Photographer’ in 1988, and ‘Fashion Fetish Fantasy,’ a collection of photos of his creations, in 1998.

Outside of his photography, Mugler was also known to enjoy bodybuilding which caused a stir when he began to present with a new look in the 2010s.

Thierry Mugler and Diana Ross at a show in 1991

Mugler dressed Bowie for his wedding to Iman in 1992.

A famously passionate designer, Mugler occasionally had drama with other designers. He was critical of a 2019 Dior show that used a song by the Dee Lites, a band that had recorded music specifically for a Mugler show in the 1990s.

‘I guess it is an homage or maybe musical chairs?’ he wrote on Instagram, followed by a thinking emoji. Mugler also tagged Dior, Kim Jones, and Honey Dijon in the post.

Mugler began to go by his original first name of Manfred in 2010s. He’s seen here in 2011, when he had began to show off his interest in bodybuilding and had already gotten some of his many cosmetic surgeries

One of Mugler’s most famous creations is this dress, worn by Demi Moore in the 1993 film Indecent Proposal

He also had a troubled relationship with Clarins, who put out his line of fragrances and more or less owned the rights to his name from 1997 onwards. He sued them over a retrospective they published.

A New York Times profile, which highlighted his newfound interest in bodybuilding, described him as a ‘notoriously difficult designer and utterly bizarre character.’

The Strasbourg-born designer trained as a classical dancer from age 9, and became part of the ballet corps at 14.

In an interview, he described a very lonely adolescence due in part to his sexuality.

‘I know what being alone is – really deeply,’ he told Vogue in 2019. ‘I had a difficult childhood and I was very alone for years and years. I was watching the stars because for me this was a new reality. There was something there, new, different more beautiful.

He said that dance and theater and eventually fashion gave him purpose in life.

‘When I started dancing, it was an opener; it was an incredible, fantastic help because it was a magical stage,’ he added. ‘The theatre was made for me. But after the beauty of the light, the red curtain and applause – everyone had someone to wait for them backstage, but me? Never. I had years and years when I was alone.’

In September 2010, his brand was renamed simply Mugler and is now run by American designer Casey Cadwallader.

‘Manfred, I am so honored to have known you and to work within your beautiful world,’ Cadwallader said in an Instagram post paying tribute to Mugler, referencing Mugler’s given first name. ‘You changed our perception of beauty, of confidence, of representation and self empowerment. Your legacy is something I carry with me in everything I do. Thank you.’

Mugler, who was very private about his age, did not appear to have married or have children at the time of his death.