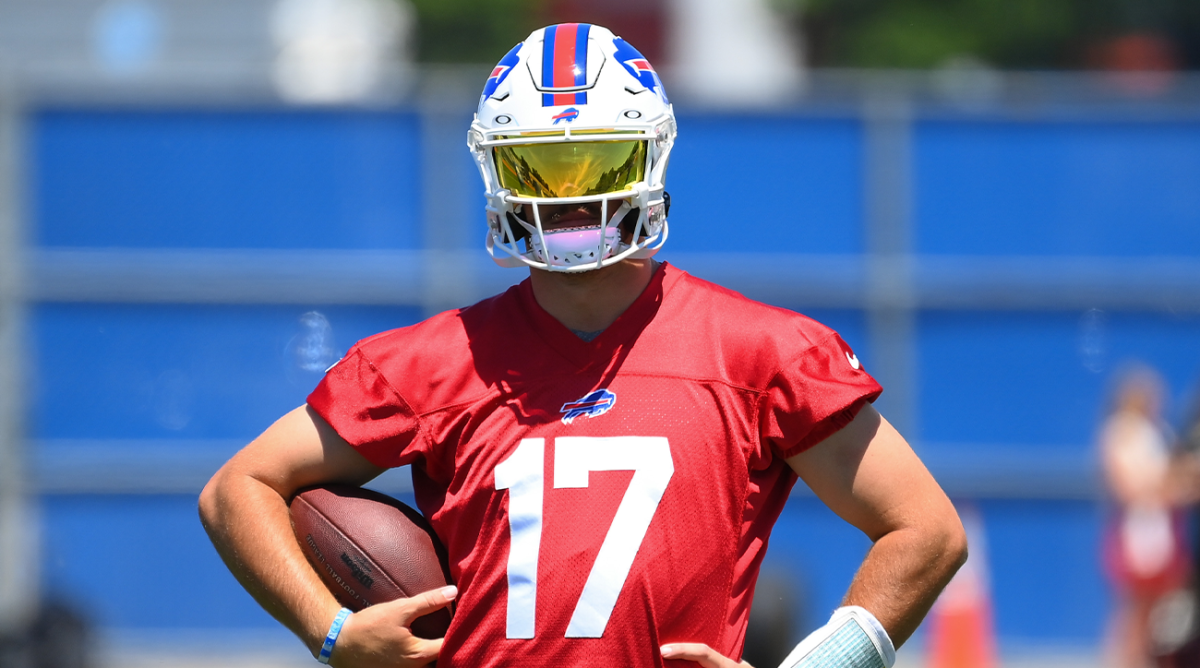 Good morning! Even if you’re not contractually obligated to watch film like Kyler Murray is—or was—I hope you’ve been grinding the tape to prepare for your fantasy draft. It’s nearly August, which means September is right around the corner. Drafts are starting up and football is almost back.

Training camp began around the NFL this week and we’ll get to all the important storylines that have already come out. Like… Michael Thomas is catching passes, Leonard Fournette looks good, contract concerns abound for Derwin James and Deebo Samuel, and DK Metcalf got paid.

Also in today’s newsletter you’ll find advice for how to proceed through the early rounds of your fantasy draft from different pick slots, a bettor’s breakdown of the AFC South and Michael Fabiano’s weekly fantasy Q&A. Here we go.

“I have pick X, who should I draft?” is a common early offseason question as some leagues assign draft orders.

Tools like SI’s Fantasy Football Draft Kit and our comprehensive rankings for multiple league types and scoring formats should help answer that question, but my editor Matt De Lima and I set out to answer that question a bit literally, because unexpected situations always unfold.

So, who should you draft at No. 1? How about No. 4? And which player(s) should you target when the next round comes around? I give you the second annual draft strategy series, which walks through draft strategies for different pick groupings in the first five rounds of a 12-team PPR draft.

Can Matt Ryan Lead the Colts Back to the Top of the AFC South?

The Colts quarterback carousel continues this season: Matt Ryan will start the 2022 season behind center in Indianapolis, continuing a trend of new Week 1 quarterbacks dating back to 2016. Is the veteran signal caller and former MVP the answer? The sportsbooks seem to think so, installing the Colts as favorites to win the AFC South, something they haven’t done since 2014.

Are the defending No. 1-seed Titans being disrespected? Or is the loss of A.J. Brown and concerns about Derrick Henry coming off an injury enough to sink this team’s playoff hopes? And what of the Jaguars in Trevor Lawrence’s second season, with Doug Pederson taking over at the helm? Then there’s the Texans, by all accounts one of the worst teams in the league.

There’s a lot to unpack in the AFC South, and we address it all in the third divisional over/under betting breakdown:

“The Colts’ toughest division competition appears to be the Titans but they traded A.J. Brown to the Eagles, and may be starting the season without Robert Woods and a rookie WR1 in first-round draft pick Treylon Burks. Indianapolis finished last season with nine wins. Can the Colts make it to 10?”

“It’s interesting that the odds are so juiced to the under for a team that has gone 23-10 over the last two years while winning the division both years. Clearly, oddsmakers believe the Titans will struggle without Brown to replicate last year’s regular-season success. A brutal schedule is not helping the Titans’ cause, either.”

“Since 2011, Jacksonville has won more than six games just once. The question bettors need to answer in this market is: Will the regime change, as well as the return of Travis Etienne, enable the Jaguars to surpass their regular season win total projection of 6.5 games and win the most games since 2017?”

“Can a Year 2 leap from quarterback Davis Mills and a defense that has nowhere to go but up propel the Texans to five wins? Or will they fall short of that mark yet again and find themselves with another pick near the top of the draft?”

Next up: NFC South!

Fantasy Football Talk on the SI Weekly Podcast
Jen Piacenti and Michael Fabiano joined John Gonzalez earlier this week to break down the ins and outs of the Fantasy Football Draft Kit, discuss how trades will affect production and opine on the No. 1 pick. Listen here.

Fantasy managers will learn a lot about how their players and potential targets are being used in the offseason from training camp reports across the country. Follow MMQB’s Albert Breer, who’s in the midst of his training camp tour with stops at the Bills, Browns and Steelers under his belt already.

Julio Jones Signed with the Bucs. What Does that Mean for Fantasy?
Jones is joining his former division rival and will be catching passes from the man who denied his Falcons a win in Super Bowl LI. Health is a concern after his disappointing season with the Titans. He has played in 19 games across the past two seasons, many of which he left early. But with Chris Godwin slated to possibly miss time early in the season, there’s a pathway to fantasy relevance for Jones in a potent passing offense, though an injury to center Ryan Jensen isn’t a good sign for the O-line.

Carson’s Retirement Leaves Seattle Backfield Open for Penny, Walker
A neck injury is cutting Chris Carson’s career short, but this is a reality the Seahawks prepared for by drafting Kenneth Walker in the second round and re-signing Rashaad Penny to a one-year deal. Penny figures to lead the backfield to start the season after closing 2021 on a high note, but Walker’s ADP is much earlier than his teammate’s. It seems a backfield committee in this post-Russell Wilson offense is the most likely outcome.

Belichick’s Praise of Jones is Nice, but Does it Spell Fantasy Success for the Pats QB?Patriots coach Bill Belichick cares about wins, not stats. New England’s offseason moves don’t inspire a lot of confidence in a strong statistical season for Mac Jones in Year 2. The team added DeVante Parker and rookie Tyquan Thornton, neither of whom were big additions to the receiver room by any means, and the Patriots don’t even (officially) have an offensive coordinator. Temper expectations for Jones, but consider backing the Patriots.

Browns’ Stefanski: “If Deshaun [Watson is] unavailable, Jacoby’s our starter”

Breaking Down the Backfield Battles for all 32 Teams

McCaffrey, Brady Among Top 10 “What If?” Fantasy Scenarios

49ers Have “moved on” to Lance as QB1, Garoppolo Has Permission to Seek Trade

Fantasy Sports Writers Association Hall of Famer Michael Fabiano is answering fantasy football questions exclusively for Winners Club subscribers. Be sure you’re following him on Twitter @Michael_Fabiano for the chance to submit your questions.

@InYaGutsSon: Damien Harris or Rhamondre Stevenson in a PPR league?

Fabiano: I like Stevenson to close the touch share gap from last season, but Harris should be New England’s top runner once again. He’s also likely to lead the team in red-zone looks, which is of course an important part of his value. Stevenson might end up being a better value based on his draft position, but I’d still prefer to have Harris this season.

@thoen88: Would you roll the injury dice and draft Christian McCaffrey in Round 1 and Saquon Barkley in Round 2? I pick No. 1 and No. 19 overall.

Fabiano: I’m not against it, but you have to be prepared for a worst-case scenario rather than simply hope for the best case. That means grabbing D’Onta Foreman and Matt Breida as handcuffs for their respective starters and being sure to have backfield depth coming out of the draft. It’s certainly a major risk-reward strategy, but if you’re not afraid to go for the gusto and willing to suffer a worst-case situation, go ahead and make the moves.

@Jesus_Rascon_11: If Jalen Hurts struggles or gets hurt, how would Gardner Minshew change the value of A.J. Brown and DeVonta Smith?

Fabiano: First, let’s hope Jalen doesn’t get “hurts” (see what I did there)! But if he does, it wouldn’t change the fantasy value of Brown or Smith. Minshew has proven to be a decent NFL starter, and his completion percentage the last two seasons (66.4) is far better than what Hurts has posted (59%) in his first 30 games at the pro level.

ACC Football Betting Preview: Pittsburgh ended Clemson’s streak of six consecutive conference titles, but the Tigers (-143) are prohibitive favorites to return to the top of the ACC. Miami (+600) and N.C. State (+800) have the best odds to unseat Dabo Swinney’s team.

Heat “Moving Ahead” With Current Team: Miami was one of the first teams to emerge as a favorite to land Kevin Durant in a trade, but the Bam Adebayo-Ben Simmons hangup hurt the chances of a deal between the teams. The Celtics, who beat the Heat and Nets on their way to the Finals, have recently emerged as a possible trade partner for Brooklyn.

Yankees Trade for Royals All-Star Benintendi: New York traded three minor leaguers to Kansas City to land outfielder Andrew Benintendi, who figures to have a role in left field. He is set to become a free agent after this season and reportedly told his new team that he plans on getting vaccinated after that prevented him from playing in Toronto earlier this year.

Trout Speaks on Rare Back Condition: Angels All-Star outfielder Mike Trout hasn’t played in a few weeks due to a back condition that could be chronic and have to be managed for the rest of his career. Trout said he doesn’t have any long-term concerns and added: “My career is not over.”

Thanks for reading! Enjoy your weekend and rest easy knowing the Hall of Fame Game is next week. The Raiders are 1.5-point favorites over the Jaguars in Canton, if you’re so inclined.