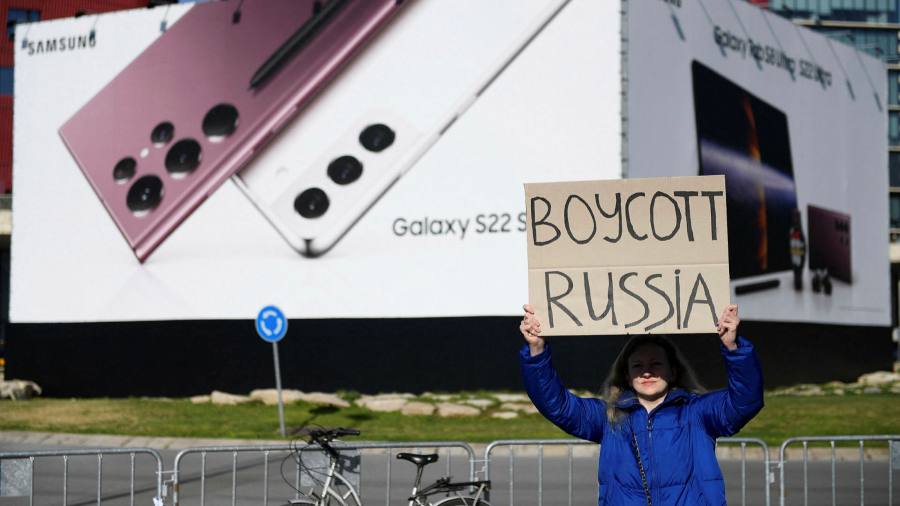 European stocks dropped and government bonds rallied on Tuesday on intensifying nerves about the effect on the region’s economies from Russia’s invasion of Ukraine.

Europe’s Stoxx 600 share index fell 1.4 per cent, dragged lower by bank shares as traders remained cautious about economic growth and the effects of removing some Russian lenders from the Swift global payments system.

The yield on Germany’s 10-year Bund, a benchmark for borrowing costs across the eurozone, dropped 0.1 percentage point to 0.06 per cent as the price of the debt instrument rose.

Italy’s equivalent bond yield fell 0.18 percentage points to 1.58 per cent. Bonds issued by Spain and Portugal, whose financial systems have benefited heavily from the ECB’s multitrillion euro sovereign debt purchases since the onset of the coronavirus pandemic two years ago, also rallied.

“It’s a bid for safety and away from equity market risk,” said Antoine Lesne, head of research and strategy at State Streets SPDR ETF business. “But it also suggests that one of the key consequences of this conflict will be a gradual shift away from monetary tightening and rate hikes in the eurozone area.”

The ECB has not raised its main deposit rate since 2011. It has bought more than €1.6tn of eurozone government bonds under its pandemic emergency purchase scheme and had been expected to turn less accommodative to tackle record high levels of inflation.

But the eurozone economy faces greater risks from the Ukraine crisis than the UK and the US, economists have said, because of deeper trade links with Russia as well as heavy reliance on Russian oil and gas.

“Europe is bearing the brunt of the invasion’s initial impact, with higher energy costs hurting consumers and the level of sanctions pressuring European growth,” ClearBridge Investments strategist Jeffrey Schulze said in a note to clients. “Such headwinds could lead to a more dovish ECB.”

The Stoxx is trading more than 8 per cent lower for the year and has swung since last week when western powers began launching sanctions against Russia.

Russia’s invasion of Ukraine has also repeatedly driven oil prices above $100 a barrel this month. Russian output accounts for about 10 per cent of global oil production.

Futures markets implied the US’s S&P 500 share gauge would fall 0.7 per cent in early New York dealings on Tuesday, while the technology-focused Nasdaq 100 would drop 0.9 per cent.