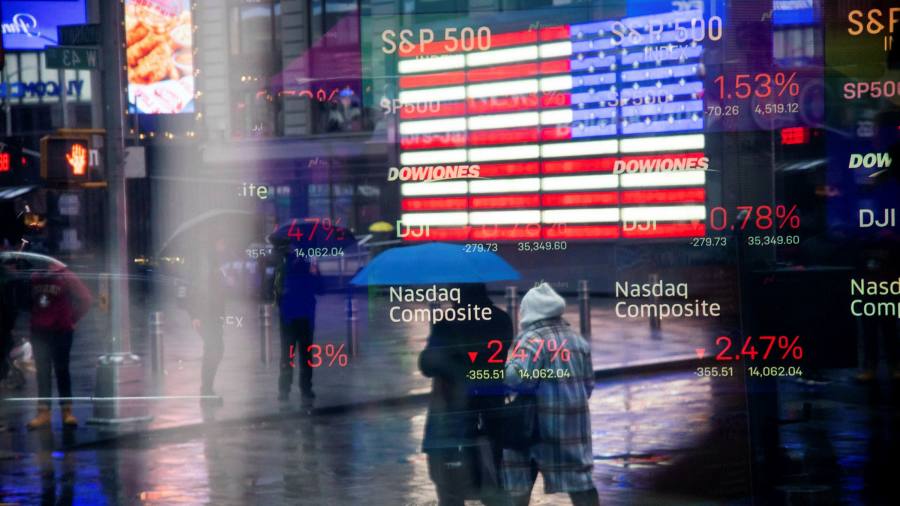 European equities dropped on Friday, as traders ramped up their bets of impending interest rate rises by the region’s central banks, while rapid swings in sentiment towards big tech stocks looked poised to continue driving volatility in the US.

The regional Stoxx 600 index lost 0.7 per cent, after closing 1.8 per cent lower on Thursday, which also marked the worst day on Wall Street for almost a year.

Futures markets implied some respite for US technology stocks on Friday, after the sector sold off heavily in the previous session, with Facebook-owner Meta shedding more than $230bn of its stock market value in an unprecedented single-day loss for a public company.

Contracts that wager on the direction of the Nasdaq 100 rose 0.8 per cent, after the tech-focused index dropped 4.2 per cent on Thursday. Shares in Amazon jumped 13 per cent in pre-market trading in response to the ecommerce group raising prices for its popular Prime subscription service. Snap, a social media group, rose 48 per cent after losing 24 per cent on Thursday.

Analysts warned that stock markets would remain volatile as global central banks respond to high inflation by rolling back the ultra-loose monetary policies they implemented to insulate financial markets from the shocks of the coronavirus pandemic.

“You’ve got a perfect storm of a sharp revaluation of the interest rate outlook from central banks, right in the teeth of an earnings season with a big discrepancy between winners and losers,” said UBS’s head of global and European equity strategy Nick Nelson.

Markets have priced in around five US rate rises this year, a major shift from expectations at the end of 2021 which has knocked the heady valuations of many tech groups that benefited from coronavirus lockdowns.

On Thursday, the Bank of England bumped up its inflation forecast to an April peak of 7.25 per cent, citing soaring energy prices and bottlenecks in global supply chains disrupted by coronavirus shutdowns.

Traders also now expect the European Central Bank to lift its main deposit rate close to zero by the end of the year. The ECB introduced negative interest rates in 2014 in an effort to stimulate lending and spending. But eurozone inflation hit a record 5.1 per cent in January.

Daily reversals in stock market mood have been common this year, while the general trend has been lower, with the FTSE All-World index having dropped almost 5 per cent so far in 2022.

Jefferies strategist Christopher Wood cautioned that a “bear market thesis” would dominate as long as the Fed maintained a “commitment to engage in meaningful monetary tightening”.

“The latest US data has offered no respite,” Wood said.

Official job data later on Friday are expected to show US employers added 150,000 new roles in January, in a decline from the previous month as the Omicron coronavirus variant spread. But average earnings, according to economists polled by Reuters, are forecast to have increased 5.2 per cent from the same time last year.

The yield on the benchmark 10-year Treasury note, which underpins debt costs worldwide, was steady at 1.82 per cent as the price of the benchmark debt instrument drifted ahead of the payrolls report.

The dollar index, which measures the greenback against six major currencies, edged 0.1 per cent lower.