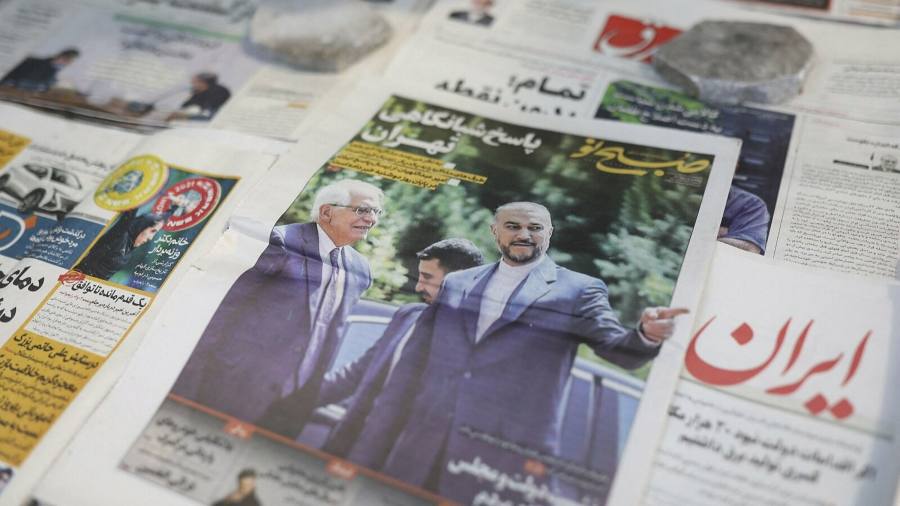 The EU has said it is studying Iran’s response to a draft agreement intended to save the 2015 nuclear accord as the bloc seeks to prevent the deal’s total collapse and to avert a new crisis.

The EU received Tehran’s response to the draft late on Monday. “We are studying it and are consulting with the other JCPOA [nuclear accord] participants and the US on the way ahead,” an EU spokesperson said. EU officials have described the draft, which was discussed by Iran and the US at indirect talks in Vienna this month, as the “final text”.

Analysts and diplomats said there were signs of some progress at the negotiations that are aimed at striking a deal under which the US agrees to rejoin the accord and lift many sanctions on Iran in return for Tehran drastically reducing its nuclear activity. But there were still outstanding issues after 16 months of EU-mediated talks that have often floundered as the main protagonists have blamed each other for deadlocks.

A diplomat briefed on the talks said the main obstacle to an agreement was Iran’s insistence that Joe Biden’s administration provides guarantees relating to the economic benefits Tehran expects to receive from sanctions relief and its concerns that a future US administration could unilaterally abandon the accord.

The nuclear crisis was triggered after former US president Donald Trump withdrew from the accord in 2018 and imposed hundreds of crippling sanctions on the republic. Iran, which was in effect cut off from the global financial system, responded by increasing its nuclear activity and is now enriching uranium at levels close to weapons grade.

Experts have said it is virtually impossible for the Biden administration to provide the guarantees Tehran wants.

There have also been discussions on the details of the International Atomic Energy Agency’s monitoring regime, with Tehran saying it is too harsh, the diplomat said.

One of the hurdles to an agreement has been Iran’s demand that the IAEA drop a historical probe into traces of nuclear material found at three undeclared sites. “They spoke through some of the issues and there’s more willingness to [agree], it’s now more about the length and timeframes of certain things,” the diplomat said. “It’s more details, than principles.”

Iran’s foreign minister Hossein Amirabdollahian said on Monday that there were three remaining “logical” concerns which Tehran wanted to be addressed before signing an agreement.

“In order to take the final step, the US must show flexibility,” Amirabdollahian told Iranian journalists.

He added that the US had verbally agreed with two of Iran’s concerns but that they needed to be included in the draft document. The third issue, he said, was related to guarantees. Amirabdollahian gave no further details.

“If we reach no agreement, that would not be the end of the world,” he said. “They talk about their plan B. We also have our plan B.”

US state department spokesperson Ned Price said on Monday that the administration agreed with the EU mediators’ position that “what could be negotiated has been negotiated”.

“The only way to achieve a mutual return to compliance with the JCPOA is for Iran to drop further unacceptable demands that go beyond the scope of the JCPOA,” Price said. “We have long called these demands extraneous.”