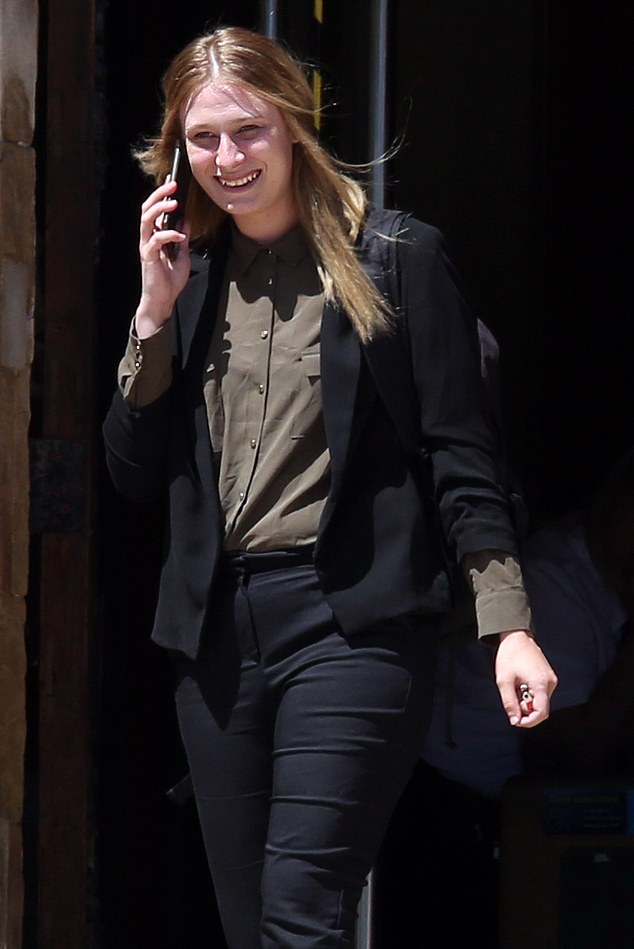 The murder trial of a baby girl has been told a doctor was deeply concerned about the ‘aggressive and volatile’ behaviour of her mother.

Lauren Saint George and Darren Hurrell, both 25, allegedly shook her to death eight days after she was released into their care against the advice of hospital staff.

The parents both deny murder, manslaughter, causing or allowing the death of a child and cruelty to a person under 16 years old.

Lily-Mai was born prematurely in November 2017 and spent the first two months of her life in Barnet Hospital, before she was discharged into her parents’ care on 25 January 2018.

Saint George and Hurrell had been homeless for several years and staff had tried to stop them taking Lily-Mai home, believing they were incapable of looking after her, jurors heard.

They were horrified when Saint George had told staff that she ‘hated’ the noises Lily-Mai made and wished she would ‘cry instead of groaning’.

The baby died at Great Ormond Street Children’s Hospital on February 2, 2018, after being found unresponsive by her parents at their home in Belmont Road, Haringey, two days earlier.

Lily-Mai was 10 weeks and two days old and only two weeks past a normal pregnancy term.

Dr James Rosenberg, giving evidence in a black suit, told jurors that he and staff at Barnet Hospital were concerned about Saint George’s behaviour in the lead up to Lily-Mai’s discharge.

Dr Rosenberg had been a neonatal consultant in charge of the baby’s care.

He took minutes of the professionals’ meeting which took place on 16 January 2018 in which staff discussed safeguarding Lily-Mai with her parents.

Lauren Saint George, pictured arriving at court on Wednesday, and Darren Hurrell, both 25, allegedly shook their ten-week-old daughter to death

Darren Hurrell arrived at Wood Green Crown Court, London, on Tuesday where he and Lauren Saint George are charged with the murder

November 21, 2017 – Lily-Mai is born prematurely and spends the first two months of her life in Barnet Hospital.

January 16, 2018 – Staff at the hospital Staff hold meetings with the parents when they talk about the care of Lily-Mai

January 21, 2018 – Another meeting is held where ‘concerns about the possibility of neglect’ are aired.

January 24, 2018 – Police are called to a domestic incident at Saint George and Hurrell’s flat in Haringey. Social worker Theresa Ferguson is informed and she makes a referral for a ‘legal gateway meeting’ which was the first step in intervening in Lily-Mai’s care.

January 25, 2018 – Lily-Mail is released into the care of both of her parents, despite medics’ concerns. Theresa Ferguson goes on holiday.

January 26, 2018 – Duty social worker Muriel Caboste visits the flat and decides there are not increased child protection issues. This is despite her noticing the parents were not following the feeding and medication chart that they had been provided with on discharge.

January 31, 2018 – Theresa Ferguson has returned from holiday and visits them at their flat to discuss the ‘legal gateway meeting’ and how to safeguard Lily-Mai. Saint George refuses to engage and storms out. Four hours later Saint George rings 999 and says Lily-Mail is seriously ill.

It was recorded, in those minutes, that Saint George was ‘often quite aggressive and hostile’, jurors heard.

The doctor went on to read the minutes aloud: ‘Mother now back on Citalopram [anti-depressant].

‘Lauren feels the same, no change since medication.

‘She describes that she uses it to help her with anger.

‘Sally restates that we want to be able to support them.

‘Sally raises concerns about Lauren responding to cues from Lily-Mai.

‘Lauren states that that is not correct.

‘She reports she has been very busy moving house and preparing for Lily-Mai.

‘He has to remind her not to snap at nurses or her father.

‘Lauren explains she will cope with that and Darren will help.’

Dr Rosenberg added that after more discussion, ‘mother left the room because she is very angry’.

The court heard that hospital staff were concerned about how her behaviour would impact Lily-Mai.

‘If a parent is angry or depressed or upset on an ongoing basis then that can certainly affect their child’s development,’ Dr Rosenberg said.

Hurrell was allegedly more responsive to what the professionals were telling them.

Even so, concerns remained, the doctor said.

‘We as a team on the neonatal unit were concerned about the ability of Lily’s parents to meet her needs and to provide a loving nurturing environment for her to develop in appropriately.’

Saint George, of Bonnington House, Enfield, and Hurrell, of Meadow Lane, Alvaston, Derby, deny murder, manslaughter, causing or allowing the death of a child and cruelty to a person under 16 years old. The trial continues.