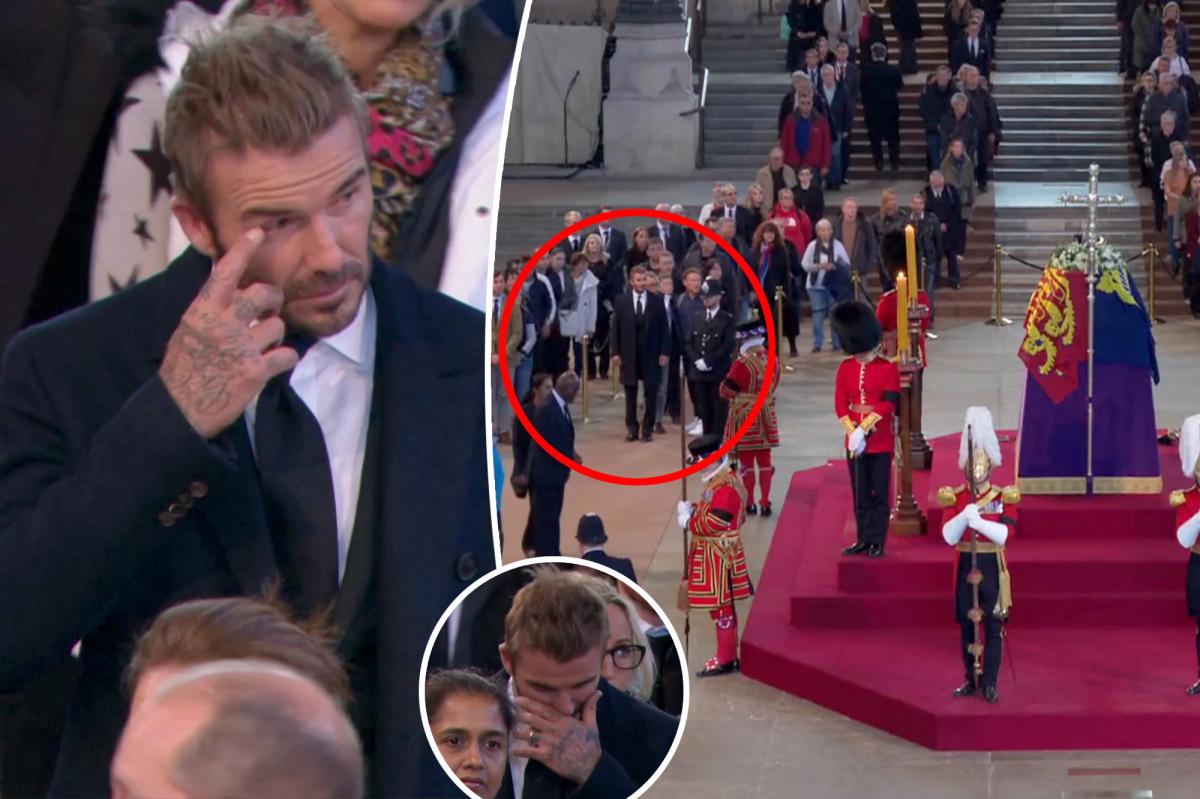 David Beckham got emotional saying goodbye to Queen Elizabeth II after waiting in line for over 12 hours to pay his respects to the late monarch.

The British soccer star was snapped wiping away tears inside Westminster Hall on Friday. He was also seen burying his head in his hands as he stood with other mourners.

He appeared to have lined up without his famous family at 2:00 a.m. on Friday morning and waited over 12 hours to see the Queen lying in state.

Beckham didn’t seem to mind the attention he got in line and allegedly even bought a bunch of lucky fans doughnuts to keep them energized as they waited in the long line, one person tweeted.

Beckham was dressed in mourning clothes, wearing a black suit and a black flat cap. He removed his cap when he entered the hall.

A source told Daily Mail that Beckham had originally gone under the radar and wasn’t being photographed by fans out of respect, but that all changed as the day went on many onlookers crowded around the star to try and get photos.

“My best friends Mum has been directly in front of him the whole time and he’s been queueing so far for ten hours just like her,” Lizzy Lloyd tweeted, adding, “My friends Mum says he joined the queue at about 2 am. He’s bought the people around him donuts.”

Lloyd also added that Beckham “agreed to have pictures once he has paid his respects to Her Majesty.”

He appeared to be the only member of his famous family who went to see the late monarch lying in state.

He appeared to be the only member of his famous family who went to see the late monarch lying in state.

While meeting the people of Wales, the inner side of…

Several people commended Beckham for waiting in line for over 12 hours despite being a celebrity and risking being seen and approached by fans.

“Without being all ‘Wah, it’s actually hard to be a celebrity,’ for David Beckham to come alone, and queue for ten hours, when everyone would recognise him, is pretty ballsy. GOLDENBALLSY,” one tweeted.

“I love that he did this, and didn’t choose the sleb fast track,” another agreed.

Beckham shared how grateful he was to be able to say his goodbyes to the ruler he so admired following his long wait.

“I was so lucky I was able to have a few moments in my life to be around Her Majesty,” he told ITV News on Friday. “A sad day but it’s a day to remember the incredible legacy she left.”

Beckham shared that he was “devastated’ after the Queen died last week.

“I’m truly saddened by the death of Her Majesty, The Queen. What an outpouring of love and respect we saw for the Platinum Jubilee for her life of service.,” he wrote in a post to social media at the time. “How devastated we all feel today shows what she has meant to people in this country and around the world. How much she inspired us with her leadership.

“How she comforted us when times were tough. Until her last days she served her country with dignity and grace.”

He added, “This year she would have known how loved she was,” adding that his “thoughts and prayers” are with the Royal Family.

Beckham had met the queen several times, including a gathering at Buckingham Palace in 2015 and an awards ceremony in 2002.