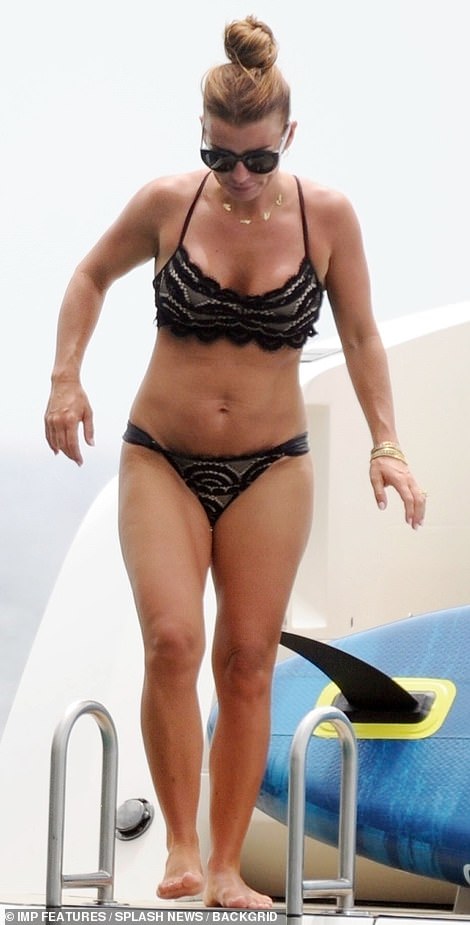 A difficult season was brushed to one side on Monday as beleaguered Derby County manager Wayne Rooney and his wife Coleen enjoyed a welcome summer break off the coast of Ibiza.

The family have been making the most of their latest overseas holiday after jetting to the notorious Balearic party island, famed for its raucous nightlife, last week – days after returning from an earlier trip to Dubai.

But foam parties and frantic all-nighters were clearly not part of the itinerary as Coleen and Wayne, both 36, and extended group of close friends unwound aboard a rented luxury yacht.

Good times: A difficult year was brushed to one side on Monday as Coleen Rooney enjoyed a welcome summer break off the coast of Ibiza

Here we go: Wayne exposed his torso while stripping off his shirt during a relaxing cruise across the Mediterranean

The holiday season couldn’t come soon enough for the couple, who have both endured a turbulent year for entirely different reasons.

On the pitch, Wayne has been powerless to stop his bankrupt Derby County side slide into the obscurity of League One football after suffering a long expected relegation from the Championship.

Meanwhile Coleen has made daily trips to London from her Cheshire home for a highly publicised libel trial initiated by Rebekah Vardy after she was roundly accused of selling stories about the mother-of-four to the press.

Evidently in the mood to put the last few weeks behind them, the couple were joined by retired footballer Michael Carrick – Wayne’s teammate during their Manchester United and England glory days – and his wife Lisa.

In good company: The couple were joined by a small group of friends for their latest outing, among them Alex Bruce (far right), the son of former Manchester United defender and current West Bromwich Albion manager Steve Bruce

Picture perfect: The iPhone was rarely out of sight as Coleen documented the trip by taking numerous photos

Stripping down to a distinctive black patterned bikini, Coleen ensured she caught the eye while socialising with the small group on the boat’s top deck.

Evidently keen to document her latest appearance on the island, the brunette kept her iPhone close to hand and ensured it was put to frequent use by taking numerous selfies, group photos and snaps of the rugged Spanish coastline.

Relief: The holiday couldn’t come soon enough for the couple, who have both endured a turbulent year for entirely different reasons

Troubles: On the pitch, Wayne has been powerless to stop his bankrupt Derby County side slide into the obscurity of League One football after suffering a long expected relegation from the Championship

Controversy: Meanwhile Coleen has made daily trips to London from her Cheshire home for a highly publicised libel trial initiated by Rebekah Vardy after she was roundly accused of selling stories about the mother-of-four to the press

Booze cruise: The brunette juggled what appeared to be two alcoholic drinks as she made her way across the deck

Settling down: Coleen made herself comfortable on the boat after pouring herself a glass of wine

Coleen and Wayne had spent seven days in London’s High Court as she rebutted claims that she had libelled Rebekah, the wife of Leicester City striker Jamie Vardy.

The mother-of-four had accused Rebekah, 40, of leaking stories to The Sun about her family after entrapping her in a notorious ‘sting operation’ on Instagram.

Coleen famously revealed in October 2019 how she planted fake stories on her personal Instagram account and had changed her settings so that the posts could only be seen by Rebekah’s account.

Rest and relaxation: She made the most of soaring Spanish temperatures while reclining on the top deck with pals

Hotting up: Wayne was seen removing his shirt as he relaxed with close friend Michael Carrick

Shady: The brunette pulled her hair into a tight ponytail, while tinted sunglasses shielded her eyes from the scorching sun

Jetsetter: Coleen’s latest holiday comes just days after the family jetted to the UK from Dubai in the United Arab Emirates

In deep water: She was seen gingerly descending into he water via a set of steps at the rear of the boat

Watchful eye: A friend waited as Coleen eventually made her way back onboard after taking a dip in the Mediterranean

Each of the bogus stories then found their way into The Sun newspaper, prompting Coleen to suggest that Rebekah’s account was the source of the leaks.

Coleen had claimed that her actions were a ‘last resort’ after she came to the conclusion someone was leaking information about her to The Sun.

She defended herself against the libel claims in court by insisting that her allegations against Rebekah were the truth.

Rebekah claimed in turn that Coleen’s post, which was published while she was pregnant, cost her a book deal and an endorsement for placenta capsules, while also acting as a lightning rod for people to abuse her on social media.

Making waves: Coleen was on camera duty as Alex Bruce, Michael Carrick and their respective partners leaped into the sea

Splash-tastic: Wayne and Alex had fun in the water while Wayne remained in the relative sanctuary of their rented yacht

Cheers! He was later seen raising a glass with close friend Michael as they unwound during their latest summer holiday

While they await the trial’s outcome, Coleen and Wayne have been racking up the air miles, with their current stay in Ibiza preceded by a family holiday to Dubai in the United Arab Emirates.

However the trip wasn’t without its fair share of controversy after the couple were slammed for swimming with dolphins in the Arab state, where they stayed at a £7,000-per-night hotel.

An outraged representative from World Animal Protection has now blasted the couple for encouraging the practice – arguing the mammals are kept in ‘tiny barren, concrete tanks 200k times smaller than their natural space’.

Say cheese: Alex took a cheerful snap as the group unwound with their drinks off the coast of Ibiza on Monday afternoon

Ready, steady: Coleen appeared to be on camera duty once again as Michael, Alex and their partners prepared for another jump

Fun:  The group were in high spirits as they took photos and downed drinks during the picturesque boat cruise

Don’t mind me: Wayne sipped water as he relaxed alongside his bikini-clad wife in Ibiza on Monday afternoon

Peter Kemple Hardy, head of campaigns at the non-profit organisation told MailOnline: ‘Sadly every year millions of animal lovers like the Rooney family are misled into thinking that captive dolphin experiences are cruelty-free, educational and good for conservation efforts.

‘Unfortunately, the industry is profiting billions of dollars from keeping dolphins in tiny barren, concrete tanks 200k times smaller than their natural space.

‘Dolphins are wild animals and in their natural environment, swim 100 square kilometres of ocean freely, sometimes much more.

Greetings! The group were seen waving to onlookers after they were spotted from the beach

Bottoms up! One group member raised her glass in acknowledgement while soaking up the sun on Monday

In her element: Coleen appeared to be having the time of her life, despite the looming outcome of Rebekah Vardy’s libel trial overshadowing the holiday

Team effort: The group gathered on the deck in a loose circle as they passed the time over a handful of drinks

Look this way Coleen: The brunette grinned while Alex took her photo as she reclined in the sunshine

‘We are calling on holiday makers to see dolphins in the wild with a responsible tour operator rather than in captivity and for tour operators like TUI to follow the lead of Expedia, TripAdvisor, Virgin Holidays, British Airways Holidays and Booking.com who have all stopped profiting from dolphin entertainment.’

Coleen had posted a collection of photos from their getaway on Sunday, including one with saw the family-of-six posing with a dolphin.

It saw them all wearing matching yellow life jackets with a delighted Kit receiving a kiss on the cheek from one.

Sailing the high seas: The group were hard to miss as their boat navigated the Mediterranean waters off the coast of Ibiza

Wine o’clock: The booze was free flowing as the brunette relaxed with her pals during the picturesque cruise

Girl talk: Coleen was seen chatting to a female friend after the girls separated from their respective partners to enjoy some time alone

Not bad: At one point the group gathered round Coleen as she showed them the photos she had taken of them leaping into the water

Pleased: Alex looked pleased as he peered over Coleen’s shoulder at the photos during their latest outing

Pals: Wayne rubbed sun lotion into close friend Alex’s back as they made the most of the Spanish sunshine on Monday

The family has since flown to Ibiza for Father’s Day and have been seen out on the town with footballers Alex and Michael and their partners.

In pictures shared on Instagram Coleen caught the eye in a pink scoop neck mini dress with an exposed midriff while flashing her bronzed legs and clutching a dazzling gold handbag.

Joining her were fellow WAGs Lisa Carrick and Lucy Bruce, whose respective husbands Alex and Michael beamed over a glass of white wine in another snap.

‘They’re kept in tiny barren, concrete tanks!’ Coleen and Wayne have been slammed by outraged animal rights activists after the family swam with dolphins during a very recent Dubai trip

Controversial: Coleen had posted a collection of photos from their getaway, including one where delighted Kit received a kiss on the cheek from one of the mammals

Instead, Coleen and Wayne appeared to be off duty, with the WAG going barefoot as she sipped from a bottle of beer while chatting with their friends on Sunday evening.

She showed off her tanned figure and dressed for the heat in her skimpy crop top, teamed with white denim shorts.

The designer fashion fan had a Saint Laurent tote bag, which retails for £1,200, slung over her shoulder.

Coleen clutched a bottle of beer as the group decided on their next destination, with Wayne later seen talking to a local taxi driver before a barefoot Coleen jumped inside the car.

Loving it:  The family has since flown to Ibiza for Father’s Day and have been seen out on the town with footballers Alex and Michael and their partners (pictured)

More sunshine: Wayne and Coleen are enjoying another sun-soaked holiday as they await the verdict for the ‘Wagatha Christie’ libel battle, hitting the bars of Ibiza on Sunday with friends including Michael Carrick

Holiday mode: While Coleen showed off her tan in a leopard print crop top and tiny shorts, red-faced Wayne looked as though he’d caught the sun

Mum and dad’s night out: There was no sign of the couple’s four sons Kai, 12, Klay, nine, Kit, six, and Cass, four, during the evening out

Summer nights: Coleen held a bottle of beer as she chatted with friends outside before the party moved to another venue

Chatting: Wayne and his wife were joined by a group of pals as they spoke with a Taxi driver through his car window