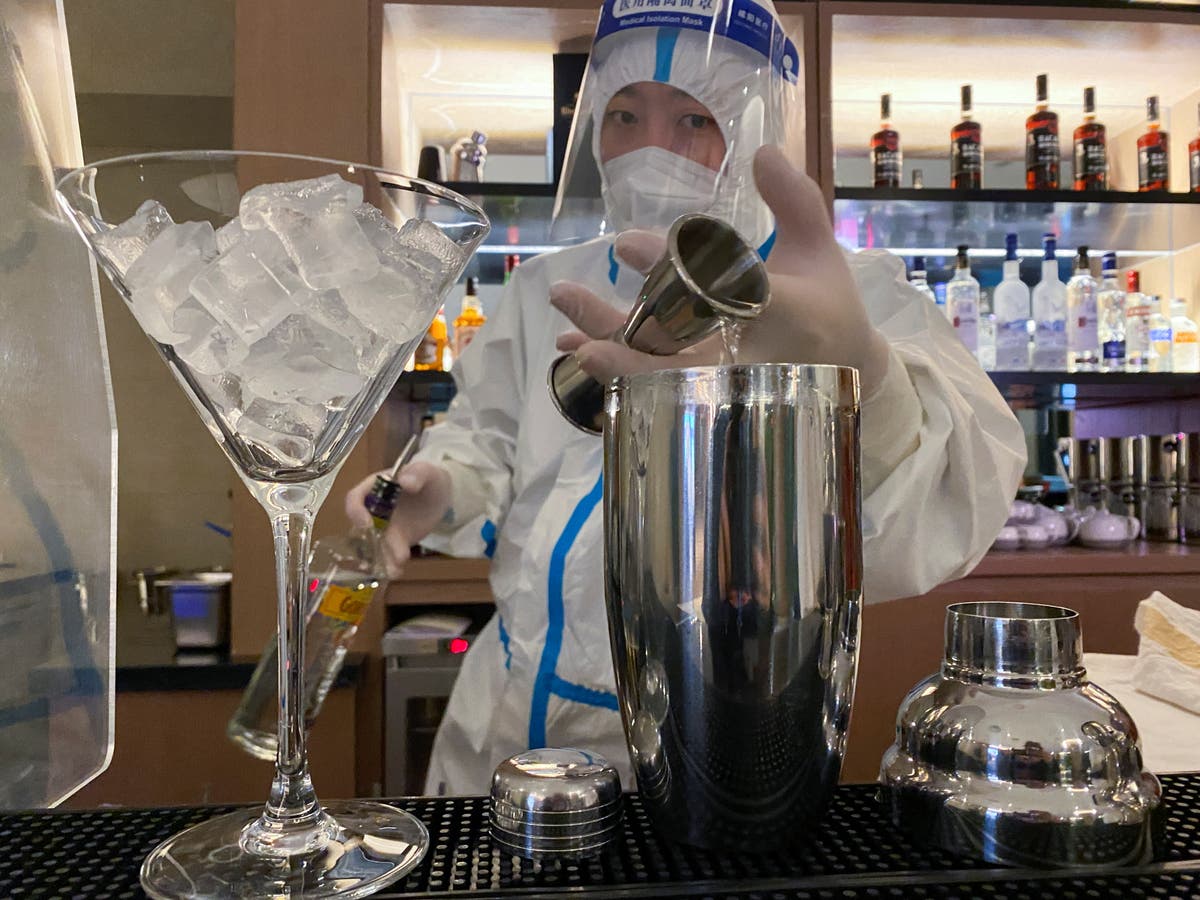 A bartender in the Chinese ski resort of Zhangjiakou wears a blue and white hazmat suit as he pours a cocktail, before passing the drink to a similarly attired waiter who shuffles across the room in blue plastic boots to deliver the drink.

The bar guests at the Nanshanli Condotel, most of them Olympics-related personnel and journalists, could see only a sliver of their servers’ faces behind white masks and giant plastic face shields.

The scene, which some participants have likened to dystopian fiction, is playing out around Olympics venues in the capital and Zhangjiakou in neighbouring Hebei province as Chinese officials try to minimise the chances of the Beijing Winter Games sparking a fresh coronavirus outbreak.

A giant “closed loop” entirely separates the thousands of international athletes, officials and journalists arriving for the start of the Games on Friday from the general public.

At the hotel bar on Wednesday night, the full personal protective equipment (PPE) worn by servers made soft swishing noises as they walked between tables while French rap played over speakers.

One server told Reuters they felt the suits provided additional protection as they interacted with foreign guests. A room service order of a club sandwich and fries came wrapped in plastic and delivered by a worker again in full PPE.

Hallways and lobbies of venues and hotels are constantly sprayed with disinfectant, giving the air a distinct smell of Lysol. Most days at the media centre, workers in PPE emblazoned with the colourful Olympic rings spray down floors and a robot sprays disinfectant into the air.

China has maintained a “zero-Covid” strategy throughout the global pandemic, aggressively isolating and tracing coronavirus cases to keep its official exposure low. Mainland China has reported 106,202 infections and 4,636 coronavirus-related deaths since the onset of the pandemic.

Olympics organisers said on Wednesday they had recorded 32 Covid cases in the previous 24 hours, 15 of them new airport arrivals. Brian McCloskey, chair of the Beijing 2022 medical expert panel, said he expected the daily number to drop once the number of participants arriving begins to decrease.

The “closed loop” will allow the athletes, coaches and other officials to shuttle between accommodation and Olympic venues on official transport but they are not allowed out to move freely in public.

Everyone in the “closed loop”, which includes the 4,500 athletes who have arrived so far for the 4-20 February Games and 20,000 local volunteers, are subjected to daily PCR tests. Officials conducted 67,137 tests on Wednesday.