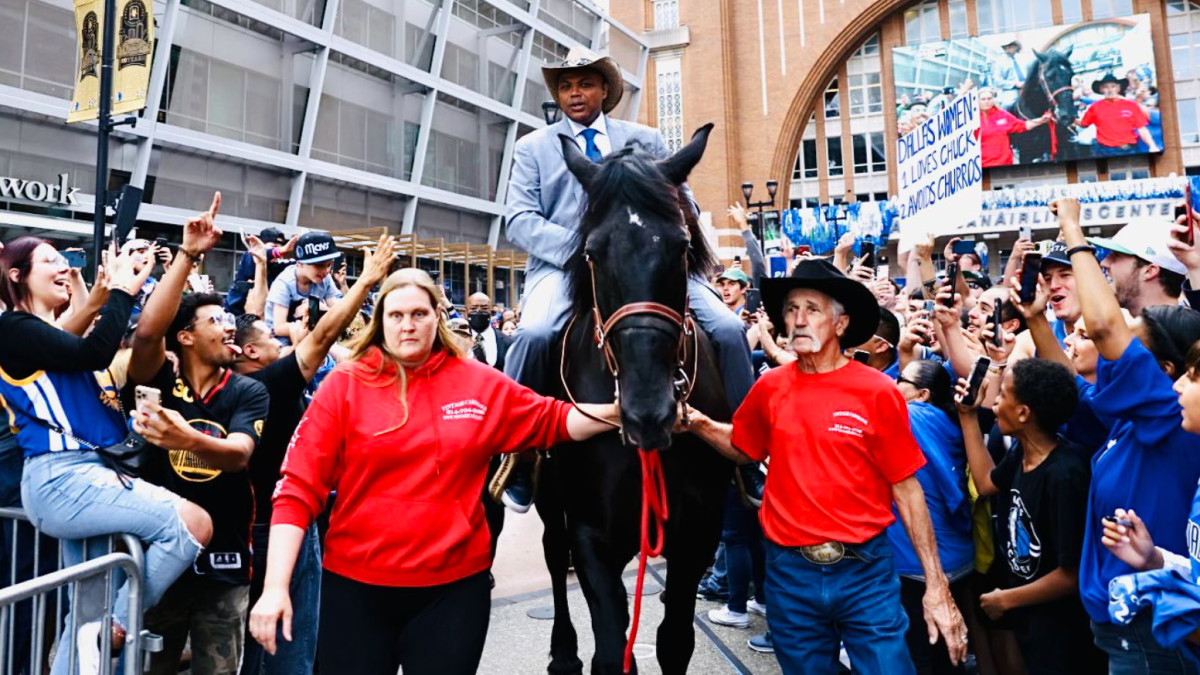 1. With all due respect to the Heat and Celtics and the Warriors and Mavericks, the best highlights of the NBA weekend came from studio hosts Charles Barkley and Stephen A. Smith.

Both men decided to up their game for their entrances to their respective pregame shows.

With the Western Conference finals moving to Dallas on Sunday night, Barkley came to the Inside the NBA set on a horse.

Because Inside the NBA is the best sports studio show of all time, the cast did not disappoint, with Shaq and Kenny Smith rooting for Barkley to fall off the horse while also poking fun at Barkley’s size.

“That horse got a strong back,” said O’Neal. “The horse is going, ‘Please get this guy off me,” said Smith, as Barkley made his way toward his colleagues.

The best part of the bit came when it was time for Barkley to get off the horse. Ernie Johnson, Shaq and Smith tried to analyze how Chuck would maneuver himself, but then it just turned into the guys rooting for Barkley to fall on his ass.

“He cannot raise that right hip over the horse’s head,” observed Smith.

“I told you, he couldn’t get it over,” yelled Smith.

Barkley finally managed to get off the horse and walk to the set to cap off a glorious stunt.

One night earlier, Stephen A. Smith didn’t use a horse. He just went with maximum swag while walking through the tunnel and into the arena for ESPN’s pregame show.

The best part of Stephen A’s entrance was his reaction to someone who called him out for walking into TD Garden like he was a player.

Say whatever you want about Barkley and Smith, but you can’t ever accuse them of not knowing how to entertain the masses.

2. Props to Luka Dončić. He got destroyed by Andrew Wiggins last night and didn’t try to deny it after the game.

3. Steph Curry took a spill last night after getting tripped along the sidelines.

Of course, this is not the first time a star player got tripped running up the sideline during an NBA game.

4. Jim Nantz gave us a vintage Jim Nantz signature line to close out the PGA Championship on Sunday.

5. I’ll never understand why we don’t see more fake-out plays, like this one pulled off by the Dodgers’ Justin Turner on Sunday, in Major League Baseball.

6. This week’s SI Media Podcast is an all–Traina Thoughts edition. Sal Licata, from WFAN and SNY, who joins me every week for the segment, is on for the full show, where we discuss the following topics:

You can listen to the podcast below or download it on Apple, Spotify and Google.

Be sure to catch up on past editions of Traina Thoughts and check out the Sports Illustrated Media Podcast hosted by Jimmy Traina on Apple, Spotify or Google. You can also follow Jimmy on Twitter, Instagram and TikTok.