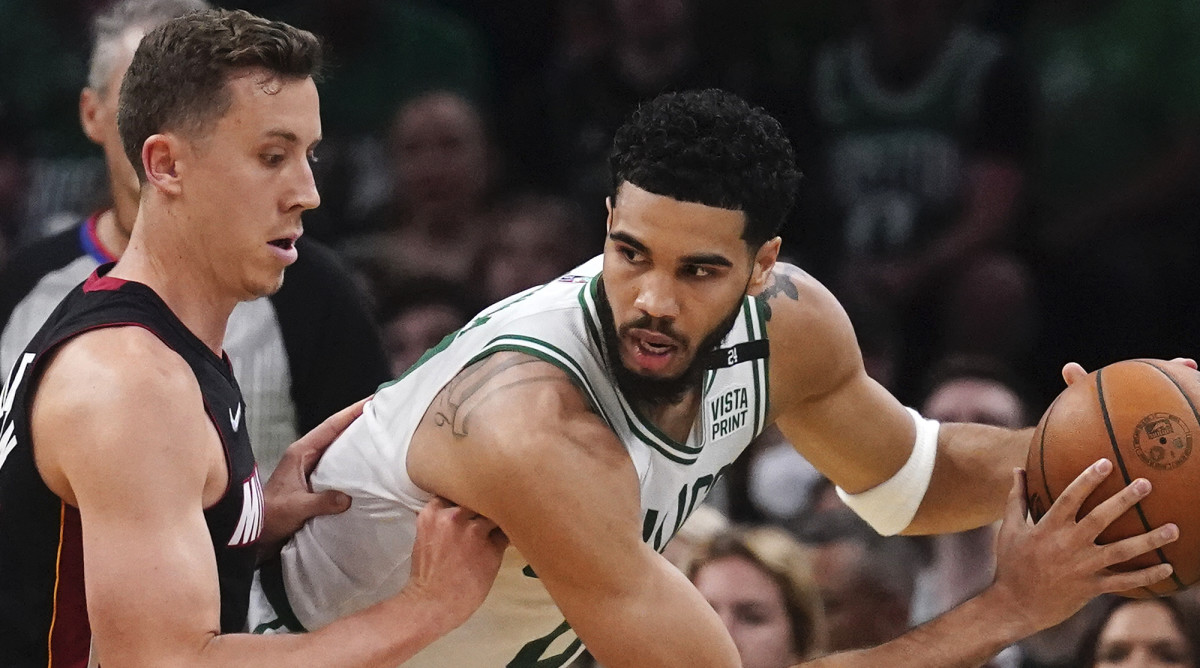 Boston added yet another blowout to a series full of them, and Miami looks battered and broken down. But it’s anyone’s guess what happens next.

This series is officially drunk.

Got a prediction for how the next three games play out? Jimmy the Greek couldn’t handicap this. The weather is more predictable. In Game 1, Miami, behind a 39–14 third quarter, won by 11. In Game 2, Boston led by as many as 34 before settling for a 25-point win. The Heat built a 26-point lead in Game 3 before squeezing out a six-point victory.

How many of you had “Big Game from Derrick White” on your Heat-Celtics bingo card? With Marcus Smart sidelined, White got the start. White has been invisible this series. He had three points in Game 1, a monster performance when compared to the goose egg he put up in 14 minutes in Game 2.

What does White do? He scores seven quick points in the first quarter, finishing with 10. He chipped in a steal. He took a charge. He contributed to the defense that held Jimmy Butler to just six points.

Overall, Boston’s defense was suffocating. Through eight minutes, Miami had one point. That’s the lowest output by any team in a playoff game in the last quarter century. The Heat finished the game shooting 33.3% from the floor and 38.9% from three. Miami’s starters had 18 points on 6-of-36 shooting.

Jayson Tatum was brilliant. Tatum has a habit of picking the Celtics up after losses in these playoffs. He scored 105 points in three games after losses to Milwaukee last round. In Game 2 against Miami, Tatum scored 27. In a must-win Game 4—do we really need to run the numbers of teams that are down 3–1?—Tatum, battling a sore shoulder, scored 31 points. He grabbed eight rebounds. He chipped in five assists. He was a plus-37 overall. He went to the free throw line 16 times—two more than Miami, combined.

In Game 4, Boston kicked the ball around. They committed 24 turnovers, which contributed to 33 Miami points. The Heat got their hands on 33 deflections, a playoff-high. In Game 5, the Celtics were more careful. They committed three turnovers in the first half. They finished with 11. Miami scored just seven points off of them.

“Taking care of the ball is huge,” Udoka said.

In Game 5, it was the difference.

The series shifts back to Miami on Wednesday, and who knows what will happen? “What you’re looking at is a great series,” Spoelstra said. “It’s 2–2.” The Heat look wounded. Butler, battling a sore knee, looked tentative. The burst wasn’t there. Tyler Herro missed Game 4 with a groin injury and there is no telling when he will return. Max Strus was so ineffective Miami dusted off Duncan Robinson for some of his first meaningful minutes this series.

“We’ve proven that we can do it,” Spoelstra said. “The margin for error for either team, whatever they’ve done to us, we can do to them.”

Perhaps. The Heat still have home-court advantage. Robert Williams limped off the floor in the third quarter. Williams, who has been in and out of Boston’s lineup with a knee injury, could miss Game 5. Smart had a noticeable limp when he walked into TD Garden on Monday. He may not be available on Wednesday, either.

Boston seemed to regain control of this series Monday.

We may be having a very different conversation in two days.