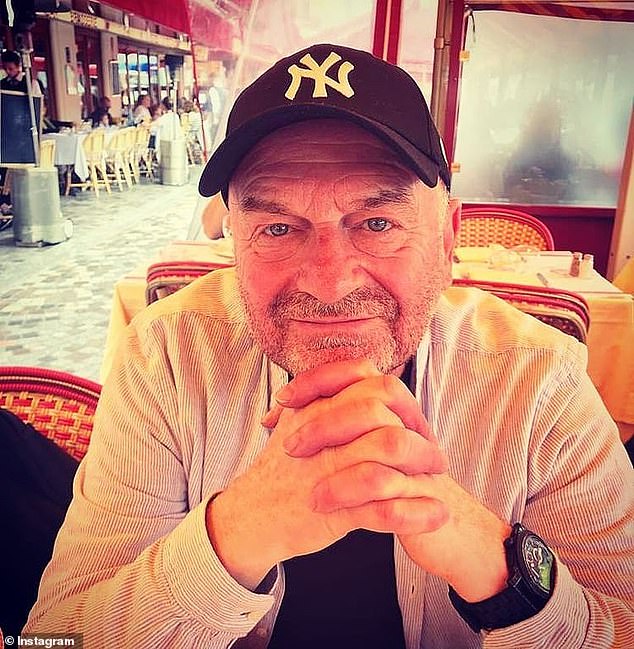 A former photographer to stars including David Bowie, Rod Stewart and Barry Manilow has been convicted of harassing a family of Jewish bakers.

Leon Paul Lecash, 70, of Chelsea, west London, sent a series of abusive emails to members of the Rinkoff family, including his 64-year-old sister Esther, and in-laws Debora, Jennifer and Ray Rinkoff over a three-month period.

Lecash denied harassing the family and argued he was trying to obtain information as a filmmaker for a documentary, ‘Bagels and Cyanide’ and an autobiography he was working on called ‘John Lennon Made Me Toast’.

He claimed he was entitled to exercise his rights to ‘Freedom of Expression,’ under Article 10 of the Human Rights Act but he was convicted of six counts of harassment.

But the presiding judge determined that Lecash, in sending a torrent of abusive emails to his own relatives, operated a ‘campaign of revenge’ against the Rinkoffs.

Lecash is credited with being the photographer on a number of iconic album covers from the Eighties, including Rod Stewart’s Body Wishes LP, Barry Manilow’s Paradise Café, Jermaine Jackson’s Dynamite and Crimes of Passion by Pat Banetar.

He also worked with David Bowie and Jefferson Airplane before becoming a TV and film producer.

Leon Paul LeCash was convicted of sending letters and emails to members of the Rinkoff baking dynasty including his 64-year-old sister Esther, Debora, Jennifer and Ray Rinkoff

Lecash had replied to a police email one 24 January last year saying he would not send any more emails, but continued to do so, Westminster Magistrates’ Court heard. He was finally charged with harassment on 23 July.

Jonathan Bryan, prosecuting, said: ‘Even if you come to the conclusion that Mr Lecash himself did not know what he did amounted to harassment, given the emails you’ve seen, any reasonable person would realise the number of emails and their content would amount to harassment.’

Rinkoff’s, established in 1911 by Ukrainian Jewish refugee Herman Rinkoff, is a family-run business based in the heart of the East End.

Others named in the harassment charges include lifestyle manager Sarah-Jane Adler and former friend and bakery supplier Geoffrey Kluman.

Mr Sundeep Pankhania, defending, argued that none of the complainants, including members of his family, asked LeCash to stop sending emails.

Mr Pankhania explained that LeCash was involved in a number of documentaries and writing a book called ‘John Lennon Made Me Toast’.

LeCash said: ‘This book is about my life and a very important literary agent wants me to write it in London.’

Lecash is credited with being the photographer on a number of iconic album covers. He also worked with David Bowie and Jefferson Airplane before becoming a TV and film producer

He explained that the book would involve family members and some or all of the allegations that have been put to them in the emails.

One of the documentaries ‘Follow the Gr$d’ was about the death of bankrupt property tycoon Scot Young who died after he plunged to his death onto railings from his penthouse flat in 2014.

The second documentary was called ‘Bagels and Cyanide’, he told the court.

‘I had taken a hiatus from work for five years to single-handedly raise my daughter. The only way I could see of trying to make a living was to restart my TV company.

‘I needed to somehow make a living. I was looking for ways to make documentaries with information that was already in my head.

‘The point of sending emails was to get a response. I never got an email being sent back to me as blocked.’

Lecash denied the fact that he knew what he was doing amounted to harassment.

Asked why he persistently emailed and didn’t stop when he received no response, he said: ‘That’s my technique, I don’t take no for an answer.

‘I feel very strongly that I am totally entitled to contact as many people as I like if I’m making a documentary.

‘If you’re a producer you have to be completely tenacious.’

The court also saw clips from emails, including one to his niece, Sarah-Jane Adler which said ‘You are a total b****,’

Mr Bryan, for the prosecution, said Lecash knew his actions would cause ‘distress’ to the Rinkoffs.

‘Abusing and insulting people is only going to produce two possible responses’, he told the court.

‘One is either they tell you to stop or they go to the police which is what happened in this case.

Rinkoff’s, established in 1911 by Ukrainian Jewish refugee Herman Rinkoff, is a family-run business based in the heart of the East End

Lecash replied: ‘Every single creative person in the world has a different way of dealing with things.

‘I just felt that the truth had to be brought out. It was my total journalistic privilege to bring the truth out.’

Wearing a brown checked shirt over a brown jumper, Lecash showed no emotion as Deputy District Judge Briony Clarke convicted him of six offences of harassment without violence.

Judge Clarke said: ‘He says he didn’t know his conduct amounted to harassment.

‘He said that he accepted that he knew the emails might cause distress he said that was the price he was willing to pay for the documentaries.

‘My judgement [given the volume, recipients, nature of the emails, and period of time] is that any reasonable person would think this course of conduct would amount to harassment of another.

‘It doesn’t matter there was no official harassment warning given to him by the police.

‘Not once have I seen an email when any of the recipients had been asked to take part, contact him or be interviewed about it.

‘In actual fact this was a campaign of revenge on his family with whom he doesn’t get on.

‘I also take the view, given what he has said, the defendant knew these emails and course of conduct would amount to harassment.’

Rinkoff’s bakery was established in the heart of London’s East End in 1911 by master baker Hyman Rinkoff who fled the pogroms in Kiev, Ukraine. It’s most recent invention was the ‘crodough’ (pictured), a blend between a croissant and a doughnut

The judge adjourned sentencing Lecash until a date to be fixed. He was granted bail on condition he does not contact any of the complainants.

Rinkoff’s bakery was established in the heart of London’s East End in 1911 by master baker Hyman Rinkoff who fled the pogroms in Kiev, Ukraine.

He initially opened his shop in Spitalfields, with his relatives living in flats above the bakery and working within his thriving business which flourished there until it was moved to Jubilee Street in 1971.

In 2016, Jennifer Rinkoff, the great-granddaughter of Herman, launched a hugely popular blend between a croissant and doughnut, dubbed the ‘crodough’.