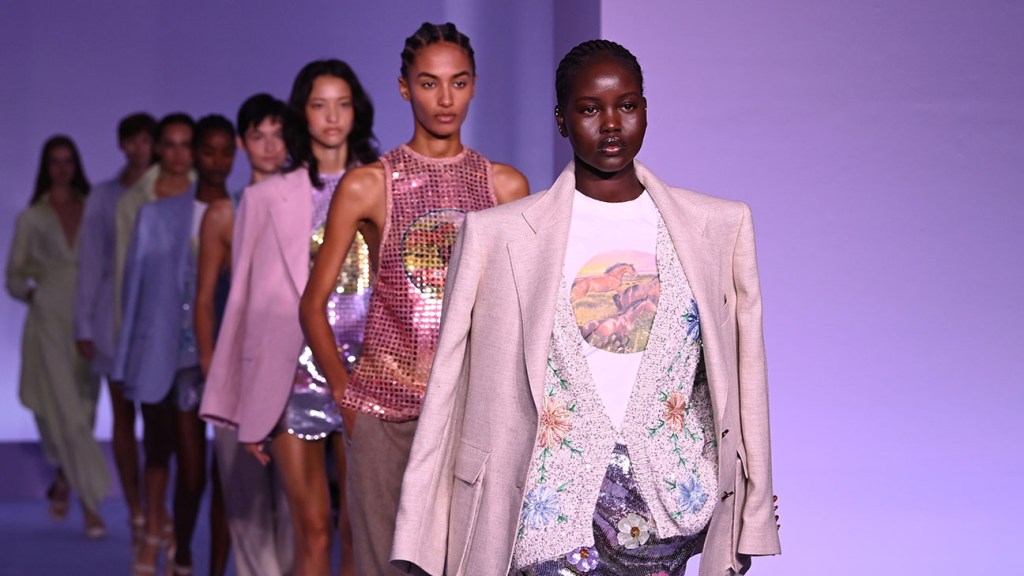 New York designers learned several lessons from the COVID-19 pandemic, not only in how to sustain a luxury-focused fashion business amid a global lockdown, but also the importance of making choices wholly rooted in personal fulfillment versus a paramount concern about the bottom line. And if a contented designer equals a commercially successful collection, perhaps that’s no accident.

That’s how both Brandon Maxwell and Carolina Herrera creative director Wes Gordon approached the Spring/Summer 2023 collections they debuted this week. Gordon’s presentation at The Plaza exuded an unabashed joy in each of its elements, from its iconic New York location to its spotlight on bright floral prints — a theme inspired by the 1911 Frances Hodgson Burnett novel The Secret Garden — and especially the show’s soundtrack, a mix of Barbra Streisand’s most exuberant Broadway and cinema hits.

“I didn’t want hipster EDM music, I wanted fun music the girls were going to love,” Gordon told The Hollywood Reporter after the show. Indeed, it was impossible not to notice that even Karlie Kloss, one of the catwalk’s champion walkers, seemed to find another gear in her step once Streisand’s voice began belting the title song from Hello, Dolly!

“Literally from the downbeat, from the first note, I knew this was going to be one of the most joyful, uplifting, empowering collections we’ve ever seen from Wes,” said Broadway producer Jordan Roth, whose company owns and operates the August Wilson Theatre, where Lea Michele is currently living out her dream eight times a week as Fanny Brice in Funny Girl, the role that made Streisand famous in 1964.

“Don’t Rain on My Parade” indeed felt more than a bit sublime as Gordon’s collection hit the runway, where celebrities including Guardians of the Galaxy actress Karen Gillan, singer Ellie Goulding, Martha Stewart and Sabrina Carpenter sat front row. Gordon was inspired by Burnett’s novel not only because it was his mother’s favorite book and she read it to him when he was a child, but it also allowed him to fully embrace his love of color and florals. “The secret component in the collection came from the injections of black you saw throughout, a note amid the softness and the romance,” he explains. “I was not worried about chasing trends — instead I’m doubling down about who I am and who the house is and just making pieces that are unapologetically about beauty.”

Five floral prints formed the heart of the collection:”the seeds of my garden,” Gordon calls them. These cheerful bouquets in bright hues of pink, yellow and pale blue were mixed with splashes of black in silhouettes that felt decidedly Upper East Side. Silhouettes included crisp white shirts and black trousers cinched with floral belts to midriff-baring mixes of bustier tops with A-line skirts that reached almost to the ankle and beautiful mix of a full-sleeved striped blouse paired with a yellow floral ballgown skirt with pockets. “I took derivations of the five prints and blew some of them up on a chiffon, shrunk some or took a detail from another,” Gordon explains. “Many of them read as totally different things, even though they’re the same anemone flower.”

Gordon also had fun with lush floral corsages placed at the shoulder on a few dresses, including a stunner of a dress in red silk crepe. If the gown looked familiar, that’s because Kate Hudson wore the design two days before its runway premiere when she appeared on the red carpet at the Toronto International Film Festival. “There’s always been this feeling that the reveal of a collection has to be a big secret, but I don’t think that’s our world anymore,” Gordon says. “If something is beautiful, then share it. I’m honored and happy she wore it the day before our show.”

Happiness is also synonymous with tranquility, and Brandon Maxwell was all too ready to channel that sensibility with his latest collection. The designer who famously got his start as a stylist for Lady Gaga and other high-wattage stars was seeking a quieter life, he says — and why not? Lately his schedule has been bursting with projects, from a stint as a guest designer for FILA, a tennis-apparel line that arrived in stores in August and feels equal parts classic and modern, as well as his work as creative director of Walmart’s fashion brands, which debuted in February. “Next week we’ll also start filming the TV show,” Maxwell adds, referring to season 20 of Bravo’s Project Runway, on which he stars alongside Kloss, fellow designer Christian Siriano, and Elle editor-in-chief Nina Garcia.

“It’s such a joy to be able to go to work and be a part of someone’s journey,” Maxwell says of the reality-competition show. “I know it’s a TV show, but the filming and the process is very real and very human. And honestly, I don’t feel far removed from where [the contestants] are, so it’s a wonderful pleasure to take part in what they’re experiencing.”

So it’s understandable why Maxwell might desire to move out of Manhattan so he can enjoy more of a bucolic existence during his off hours. The designer quickly discovered that the early-morning hours, filled with birdsong and sunrise hues, were not only relaxing, they also were highly inspirational. “Those hours between 5 and 7 a.m. have been the most restorative thing in my life the past couple of months,” he told THR backstage after his show.

Lavender, which Maxwell calls “a very tranquil color that also lacks a sense of urgency,” became a central theme, also employed for the lighting of his presentation space, a series of galleries at Christie’s auction house in Midtown. From the start, sunrise tones mixed with neutrals created a pale blend in pieces like low-slung trousers in wheat with an apricot tank splashed with clear sequins, as well as asymmetrical skirts that dipped down on one hip and wide-leg trousers paired with a strapless top embellished with black sequins and gold daisies.

Ultimately it was a terrific combination of polish and ease. “You never want to lose the DNA and the core of the brand, which is a very polished look,” Maxwell says. “But you also want to infuse it with where you’re at right now, which for me is a little more relaxed place, I guess.”

Maxwell’s florals likewise exuded that ease, never feeling precious or forced; rather, one print evoked thoughts of the light-sensitive paper kids use to make nature prints in elementary school — which isn’t to say they looked childish. Instead they felt chic and natural in their simplicity. “Where I’m living now, it’s brought up a lot of memories of where I grew up,” Maxwell explains, referencing his Texas roots. “I think a lot of the peace and quiet has triggered thoughts of when life moved a bit more slowly, the future seemed unknown, and I dreamed about working in fashion. With that in mind, I wanted some things to feel a little less obvious.:

A flowing strapless gown in that floral print was among the hits of the collection, as was a silver sequined mermaid skirt embellished with sequin flowers in pink, lavender and mossy green — just in case Maxwell’s red-carpet fans were worried he wouldn’t have those pieces at the ready. “Because I was a stylist for so many years, I think that’s always going to be in my head, even if it’s not something I’m consciously planning,” he notes. “Right now I’m really focused on saying what I want to say through the collection; if that turns out to include a long dress, great, but if it doesn’t, that’s OK, too. The last few years have been tough, but right now, I feel really grateful.”