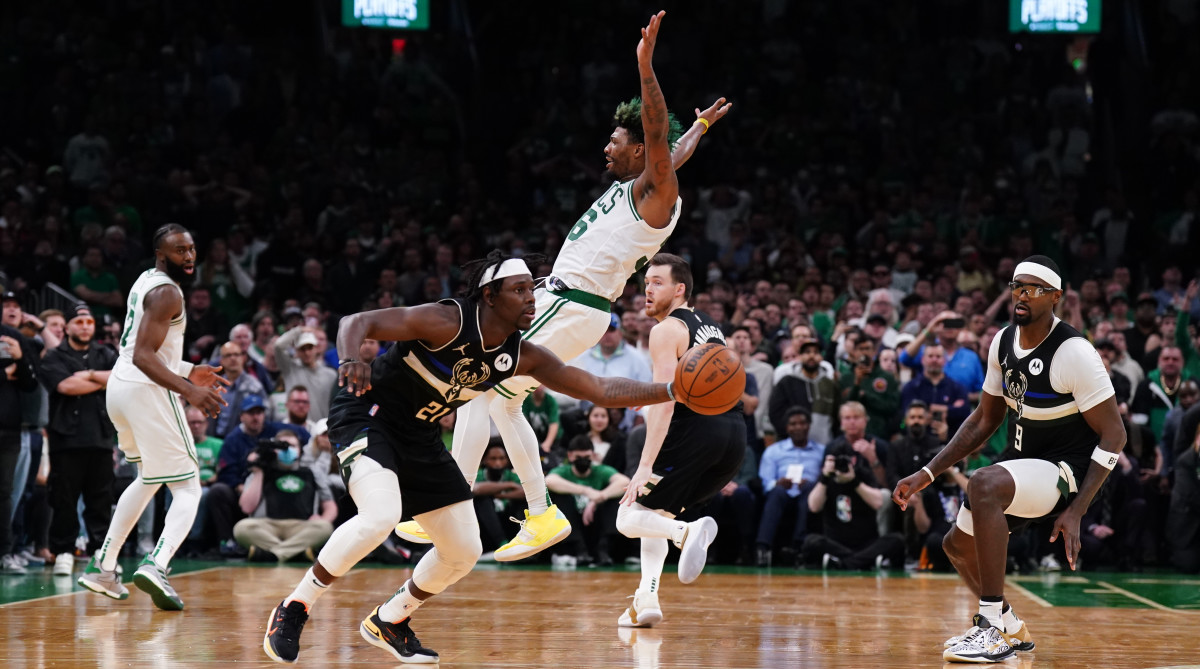 And, seriously—how did that happen?

Said coach Ime Udoka, “We know we gave up a golden opportunity tonight.”

Added forward Jaylen Brown, “We gave it away.”

In a wild, unpredictable NBA playoffs—the Grizzlies beat the Warriors by how many?—this game may top them all. Ten minutes to play, Boston up 14 and this game was over. It wasn’t that the Celtics were playing great. Far from it. Jayson Tatum had 34 points … but needed 29 shots to get them. Brown had 26. Al Horford, the hero of Game 4, had eight. Daniel Theis, dusted off again with Robert Williams sidelined, was the only Celtics sub in double-figures.

Milwaukee wasn’t capable of a rally. At least they shouldn’t have been. Didn’t have the firepower. At least they didn’t appear to. How many times have we been reminded how great Boston’s defense was? No way the Bucks could come back against it. With Khris Middleton sidelined, the last few games of this series have been the (Giannis) Antetokounmpo show. He scored 42 points in a Game 3 win. He scored 34 in a Game 4 loss. Early in Game 5, the Bucks attempted to move the ball around. Jrue Holiday had nine points. Grayson Allen had five. Bobby Portis chipped in four off the bench.

But when the Celtics’ defense tightened, Giannis took over. He scored 15 points in the second quarter. The rest of the Bucks scored four. He added 13 in the third. On the move, Antetokounmpo was unstoppable. He overpowered smaller defenders. He Euro-stepped around bigger ones. He pulled down 11 rebounds, he got to the free throw line 10 times and connected on nearly 60% of his shots.

But he had no help. Through three quarters, only one other Bucks player, Holiday, had cracked double figures. He had 16 points, but he needed 16 shots to do it. Wesley Matthews contributed nothing. Brook Lopez was a non-factor. Boston had clobbered Milwaukee in the fourth quarters of the previous two games and had the NBA’s No. 1 defense to close it out.

Only they didn’t. A Pat Connaughton three with eight minutes left cut the lead to single digits. A pair of Bobby Portis free throws made it six. With under a minute to play Holiday hit a three that tied it. The Bucks trailed by two when Antetokounmpo went to the free throw line with 14 seconds left. He made the first. He missed the second but Portis, back in the rotation after playing just 15 minutes in Game 4, pulled down the rebound and flipped back in.

Boston still had a chance. Coming out of a timeout Smart sprung free on the baseline. He lined up a short runner. And then Holiday, perhaps the NBA’s best perimeter defender not named Smart, came over for the block. “That’s what Jrue does,” says Antetokounmpo. Two Connaughton free throws stretched the lead to three. A Holiday steal of Smart in the final seconds ended the game.

“Credit Milwaukee,” Brown said. “They play hard for 48 minutes. We got away from what we do well late. We weren’t as purposeful down the stretch and it cost us.”

Championship DNA is a phrase thrown around loosely in sports. Too loosely. The Bucks just showcased it. They could have folded in the fourth quarter. They were laughably outgunned. Middleton’s absence had forced Antetokounmpo into a steady diet of isolations and shoved Holiday into a second scorer position he isn’t truly comfortable in. A loss in Boston, in an eardrum-splitting arena, would have been excusable.

But they didn’t fold. The Bucks surrendered nine points in the final eight minutes. Antetokounmpo, who has struggled with his three-point shot all series, knocked down a big one. Mathews did, too. Portis made four free throws in his final eight minutes. Even when the offense is sputtering, the Bucks never lose faith in each other.

“We’re always disciplined,” said Antetokounmpo. “We always give everything we have … most of the time we do the right thing. Sometimes it doesn’t go our way. I believe everyone has the trust in one another that we are going to make the right play. That we are going to make the extra pass. That we are going to always be there no matter what the outcome is. I feel like this group, no matter what the outcome is, we can go back home and feel good about ourselves. When we watch film, it’s never about ‘you gotta give more effort’ or ‘you gotta guard this guy better.’ The effort from us, from this team, most of the time is always there.”

The series shifts back to Milwaukee on Friday and Game 6 figures to be just as tight. These are two elite defenses. It’s the Bad Boy’s Pistons vs. the mid-90’s Knicks. Pernell Whitaker vs. Floyd Mayweather. The Steel Curtain vs. The Monsters of the Midway. Every possession between these two teams has been a street fight. At one point, late in the fourth quarter, Giannis took a shot to the side of the eye that drew blood.

But the Bucks have pushed the Celtics to the brink. Boston has shown great resolve this season, adapting to a new coach, overcoming a horrific start, battling through injuries and COVID-related illness. They will need to show more of it to beat Milwaukee on its home floor.

On Friday, we will see if the Celtics can do the same.