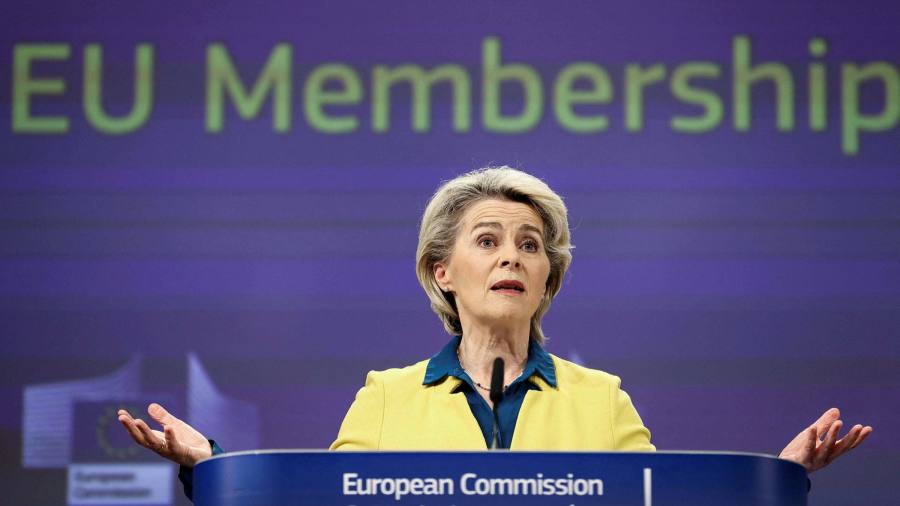 The European Commission has recommended that Ukraine be made an official candidate to join the EU, a significant step for the war-torn former Soviet republic on what is set to be a long and arduous path to membership.

The decision by the EU’s executive marks a new stage in Brussels’ eastern expansion and a significant leap forward for Kyiv’s western integration efforts amid Russia’s invasion of the country.

But it paves the way for what is likely to be an extensive debate at an EU Council summit of the bloc’s 27 leaders next week, where unanimous support among the existing member states will be needed to formally apply the commission’s recommendation.

Some member states, including the Netherlands and Portugal, have voiced misgivings over granting Ukraine candidate status, arguing that it risks creating false expectations for Kyiv.

If given that status, Ukraine would then need to be granted the opening of formal accession talks, which themselves can last more than a decade as the country works to meet EU standards on myriad areas from anti-corruption and the rule of law to trade and migration.

Ursula von der Leyen, president of the commission, said on Friday that the EU’s executive believed Ukraine should be given the status on the proviso that it continued to make reforms to bring it in line with EU regulations. These reforms include the rule of law, anti-corruption and its judiciary system.

“Ukraine has clearly demonstrated the country’s aspirations and determination to live up to European values and standards,” von der Leyen told reporters.

“Ukraine should be welcomed as a candidate country . . . This is on the understanding that good work has been done, but important work also remains to be done,” she added. “This entire process is merit-based, so it goes by the book.”

A senior commission official described the recommendation as a “morale boost” for Kyiv as the war raged. “And that really matters.”

“I commend the positive EU Commission conclusion on Ukraine’s candidate status. It’s the first step on the EU membership path that’ll certainly bring our victory closer,” Zelenskyy wrote on Twitter. “I expect a positive result from EU Council next week.”

The commission on Friday also recommended that Moldova should be granted candidate status alongside Ukraine, but said Georgia should make further reforms before it was awarded the same status. All three former Soviet states applied to join the EU in the days following the start of Russia’s invasion on February 24.

Ukraine’s bid to be recognised as an EU candidate received a significant boost on Thursday with the joint visit of French president Emmanuel Macron, German chancellor Olaf Scholz and Italian prime minister Mario Draghi to Kyiv, where the bloc’s three most powerful leaders endorsed its ambitions.

However, even if Ukraine is granted candidate status by the 27 countries next week, it would face years of negotiations before having the chance to become a member of the EU.

The most recent country to join the EU — Croatia — took nine years to become a member after being granted candidate status in 2004, while North Macedonia has been an official candidate country since 2005. Albania, Montenegro, Serbia and Turkey are also candidate countries.

In documents released on Friday, the commission said Ukraine was “well advanced in reaching the stability of institutions guaranteeing democracy, the rule of law, human rights and respect for and protection of minorities” and that it had “continued its strong macroeconomic record”, despite Russia’s invasion.

But it warned that Ukraine’s membership was contingent on “ambitious structural reforms” to reduce corruption and the influence of oligarchs.

The country would need to review the selection procedure for judges to its supreme court, prove a record of fighting corrupt practices and money-laundering, implement “anti-oligarch” laws and free its media from “vested interests”.

The commission said it would report on the progress of all three countries by the end of this year.