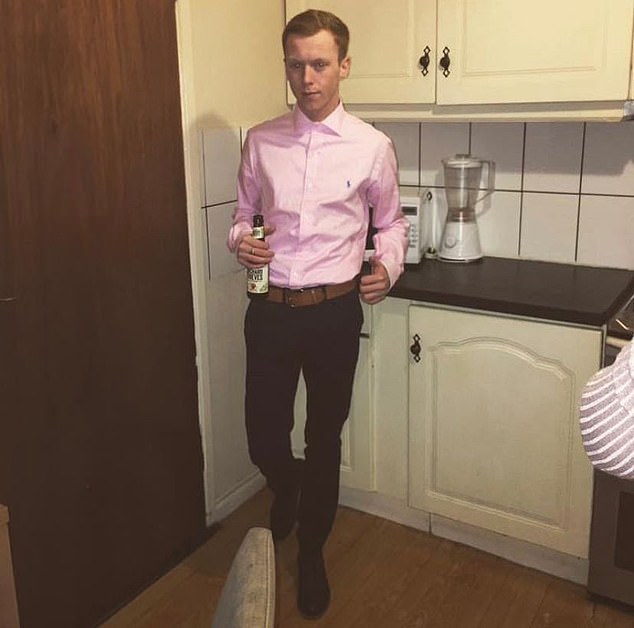 A brother has been charged with killing his sister, 18, and eight-year-old twin siblings in Dublin, as neighbours honoured the tragic victims on Monday.

Andy Cash, 24, appeared before Judge Patricia McNamara for a special sitting of the Criminal Courts of Justice in Dublin on Monday night.

Twins Chelsea and Christy Cawley, aged eight, and their older sister Lisa Cash, 18, were killed at their home in Rossfield Avenue, Tallaght.

The court heard Mr Cash replied ‘no comment’ when charged with the murders of his three siblings, which occurred in the early hours of Sunday morning.

Judge McNamara denied a request from Mr Cash’s solicitor that he should be kept in solitary confinement.

Andy Cash (pictured), 24, has been charged with killing his sister, 18, and eight-year-old twin siblings in Dublin, as neighbours honoured the tragic victims on Monday

Twins Chelsea and Christy Cawley, aged eight, and their older sister Lisa Cash, 18, were killed at their home in Rossfield Avenue, Tallaght. Pictured: Locals release balloons at a vigil for the three siblings, who died on Sunday morning

At about 9.20pm last night, Mr Cash appeared before a special sitting of Dublin District Court, charged with three courts of murder. His defence solicitor then made the request regarding solitary confinement for his client.

Mr Cash of Tallaght, south Dublin, stood when requested by Judge McNamara so she could formally identify him at the special sitting.

McNamara said that bail could not be granted by the court for the offences. She remanded Mr Nash in custody. He will appear before Cloverhill district court at 10am next Friday, September 9, via video link.

Cash allegedly stabbed Lisa when she tried to protect the twins, while their 14-year-old brother managed to escape through a window and call for help, the Irish Sun reported.

Lisa’s body was found at the bottom of the stairs with apparent stab wounds.

It comes as the tragic victims’ family and friends were joined by a large group to mourn at a vigil held outside their house this afternoon.

Teddy bears, flowers, and candles were placed outside the home in West Dublin.

But the neighbours in Rossfield Avenue, Tallaght are trying to get very different images out of their minds – the horrific scenes that unfolded in the early hours of last Sunday morning.

Undated family handout photo issued by An Garda Siochana of Lisa Cash, 18, who along with her two younger siblings, eight-year-old twins Christy and Chelsea Cawley, died in a violent incident at a house in Tallaght, Dublin

Undated family handout photo issued by An Garda Siochana of eight-year-old twins Christy and Chelsea Cawley, who along with their elder sister, Lisa Cash, 18, died in a violent incident at a house in Tallaght, Dublin. One man has been arrested in connection to their deaths

Lisa Cash and her eight-year-old twin siblings Christy and Chelsea , died after the incident at their home. It is believed that older sister Lisa was babysitting at the time they lost their lives.

Now, three local schools are united in grief, and are together trying to find a way to explain the deaths of three young people to classmates and friends and minds too young to grasp what happened in that home.

Last night, balloons were released into the air in their memory, while schoolchildren and friends broke down in tears as their parents struggled to find the words to comfort them.

The victims’ 14-year-old brother was taken to hospital with serious but non-life threatening injuries, and their mother, a woman in her 40s, was released from hospital on Sunday and is being supported by her family.

Taoiseach Micheál Martin has expressed his ‘deepest sympathies’ to their family, and said that the ‘terrible tragedy’ had ‘left the nation shocked and very saddened’, while Garda Commissioner Drew Harris described the deaths as ‘dreadful and traumatic’.

Flowers and candles left after a vigil outside a house on Rossfield Avenue in Tallaght, Dublin, where Lisa Cash, 18, and her eight-year-old twin siblings Christy and Chelsea Cawley died in a violent incident

Mourners gathered in droves to leave candles, messages and flowers along the wall outside the home where the trio were murdered

Minister for Higher Education Simon Harris said: ‘What we’re all reading in the newspapers and hearing on television and on radio programmes is just beyond a horrifically tragic and devastating scenario.’

‘Three young beautiful lives to be extinguished overnight… We think particularly of that community, but I think it’s something that has shocked the entire country.

‘Our hearts and thoughts and our prayers go to the family, to their poor mum and the 14-year-old boy, to all their neighbours, all their friends, to the schoolchildren going back to school today, where there’ll be two empty desks where beautiful twins only returned to school in recent days.

‘I think the whole nation holds all of them in our thoughts.’

Neighbours said they will never forget what they saw and heard in the early hours of Sunday.

One neighbour, who did not want to give his name, said he was watching TV when he was alerted to scenes outside.

‘I went outside and could see gardaí with their weapons out. We couldn’t make sense of what was happening. It was very traumatic to see it all happen.

‘They were a lovely, beautiful family. Our granddaughter sometimes played with the kids out on the street.

‘None of us slept that night. People will not get over this. The community is rocked badly, mentally and physically. The guards did really well that night. They should be given medals. And the paramedics fought and fought so hard to save them. Lisa was a beautiful young girl and she tried her best to save those kids.’

Outside the house are pictures of the three, showing Christy and Chelsea making their first Holy Communion, among the long row of floral tributes.

Pictured: Dozens of mourners turned up at the vigil to pay their respects to the tragic victims who died in a violent incident on Sunday

Another neighbour earlier told the Irish Daily Mail her daughter had only been playing with Christy and Chelsea two days previously.

‘It was the first day that I let her out to play around the corner – just down the road from their house.’

Her young daughter continued the story: ‘We played hide and seek down there. We had a good time. I can’t believe it – that they are not here now.’

Another neighbour, who also asked not to be named, told the Mail: ‘Their brother who was in the house went to get help. He is their hero. There are no words to describe what we saw and what happened.

Another neighbour, who also asked not to be named, told the Irish Daily Mail said: ‘There are no words to describe what we saw and what happened. The whole community will need counselling now.’

People attend a vigil outside a house on Rossfield Avenue in Tallaght, Dublin, where Lisa Cash, 18, and her eight-year-old twin siblings Christy and Chelsea Cawley died in a violent incident

The principal of St Aidan’s school, Kevin Shortall, paid tribute to Lisa, saying she was ‘a quiet, beautiful young girl, very diligent, hard-working, got on with her work, was a great support to her friends in times of trouble.

‘She is remembered as one of the most honest, genuine young people, full of integrity and no fuss, no drama around her.

‘I believe she was babysitting at the time, and that would have been something that she was just so good at.

‘She was the kind of person you could trust. That’s the person Lisa was.

‘We are all just meeting each other and shaking our heads and giving each other hugs and things like that. It’s a very difficult morning.’

Mr Shortall said he had liaised with the principal of the primary school that Christy and Chelsea had attended on how to respond to the ‘unprecedented’ tragedy.

On Sunday, the Brookfield Community Centre opened to allow people to gather and help them deal with the tragic news.

‘We’ve lost three young, vibrant, beautiful lives out of our community, in the most unimaginable terms, and it’s going to be a really difficult road ahead.

‘People are numb. I think it’s not sinking in, but it’s there and it’s so raw for people and it’s something you never imagine is going to be on your doorstep.

‘The scale of what’s emerging in terms of the detail, you never imagine that’s something to happen, particularly to children, and the wider community here are well aware of what happened because they saw it.