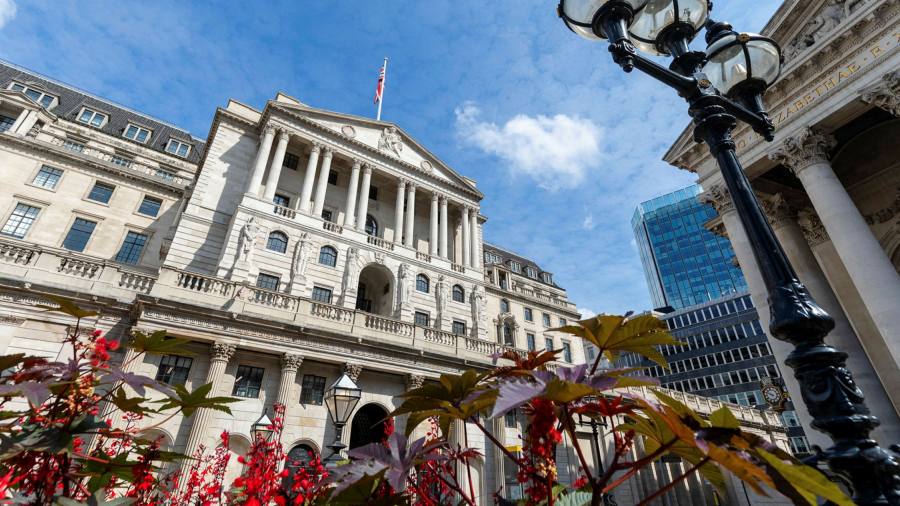 The Bank of England raised interest rates by 0.25 percentage points on Thursday, moving more cautiously than other central banks while warning inflation would climb above 11 per cent by the end of the year.

The increase — the fifth time the BoE’s Monetary Policy Committee has tightened policy in back-to-back meetings — takes the benchmark rate to 1.25 per cent. But, in a split vote, the committee held back from making a bigger 0.5 percentage point move, which won support from three members.

Minutes of the MPC’s meeting painted a dismal picture of the outlook for both growth and inflation, with the committee warning that price pressures were becoming more embedded, but the majority judging that the economy was already weakening enough to bring inflation under control without more drastic action.

The BoE now expects CPI inflation, which hit a 40-year high of 9 per cent in April, to rise slightly above 11 per cent in October — higher than its May forecasts suggested — reflecting a new rise in oil prices and recent estimates of the likely increase in regulated energy prices.

Some analysts were critical of the BoE’s caution, saying it should have acted decisively to prove it would not tolerate double digit inflation but others said its approach reflected the UK’s economic outlook, which is deteriorating faster than elsewhere.

Julian Jessop, a fellow at the Institute of Economic Affairs, said the BoE’s modest move would please no one, and that it should have “gone big or not bothered”.

The BoE said it would be “particularly alert to indications of more persistent inflationary pressures” and would “act forcefully” if needed — which some analysts took as meaning the Bank would be open to bigger interest rate rises in future.

But the MPC also dropped its previous guidance that “some degree of further tightening” might be appropriate. Instead it said the scale, pace and timing of any further increases would reflect the evolving economic outlook.

Its approach contrasts with the more aggressive action taken this week by the US Federal Reserve, which on Wednesday raised its benchmark rate by 0.75 percentage points, while signalling that further rate rises could be both larger and swifter than expected.

The Swiss National Bank also made a bold move on Thursday, raising interest rates for the first time in 15 years without waiting for the European Central Bank to begin tightening policy.

Karen Ward, strategist at JPMorgan Asset Management, said the BoE should have made a similarly decisive move, because it needed to “send a clear message to other price setters in the economy . . . It had to show it hasn’t gone soft on inflation.”

But Vivek Paul, strategist at BlackRock Investment Institute, said while the Bank was one of the first to increase rates, it “now faces some of the most acute risks to near-term growth”. James Smith, economist at ING, said Thursday’s decision should be read “as another sign that the Bank isn’t going to tighten nearly as much as markets expect”.

Although the BoE’s staff now expect GDP to fall by 0.3 per cent in the second quarter of the year — a weaker outcome than projected in the bank’s May forecasts — the committee saw little change in the growth outlook, with consumer spending and business sentiment holding up.

It also saw no sign of pressures easing in the labour market, with businesses telling the BoE’s agents that they expected to struggle with recruitment for at least the next 12 months, and were reaching pay deals averaging just over 5 per cent — much higher than a year earlier.

However, the majority in favour of a smaller 0.25 per cent increase argued that demand might already be starting to slow in line with the BoE’s May forecasts — which had shown inflation falling below its 2 per cent target within three years.

The pound briefly dipped following the Bank of England announcement, before recovering to trade little-changed on the day at $1.2184 against the US dollar.