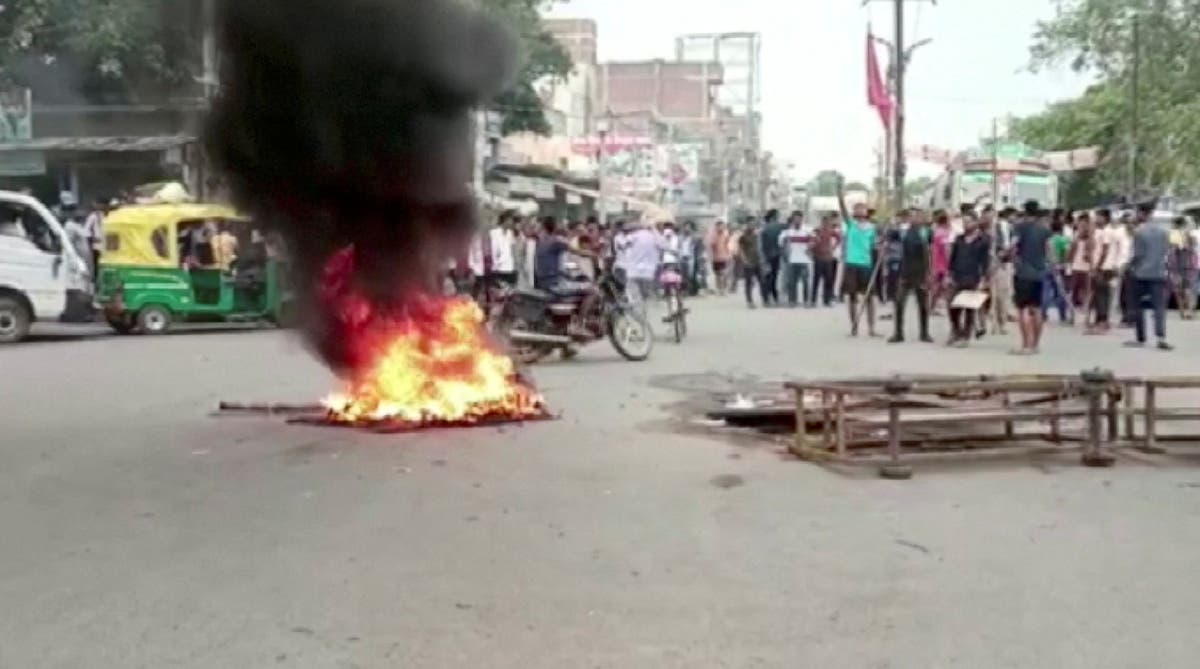 Violent protests broke out in major Indian cities on Thursday, two days after the government announced a major overhaul to the recruitment process in the Indian armed forces.

Hundreds of young aspirants set train coaches on fire, blocked railway tracks and roads, and clashed with security forces as they raised slogans against the new US army-style short-term recruitment plan that they say will leave them unemployed.

The government of India on Tuesday unveiled the “Agnipath” or “Path of Fire” programme, which will induct aspirants for a short-term four-year contract into three services – navy, airforce and army. On completion of this programme, only 25 per cent will be retained and the others will be released.

Touted by defence minister Rajnath Singh as “major defence policy reform” to make the Indian armed forces more “battle-ready” and youthful, the move is aimed at cutting down ballooning pensions and salaries, which has been a long-pending issue for one of the world’s largest forces.

Demanding the rollback of the plan, a huge number of people hit the streets in the state of Bihar, Rajasthan, Haryana and Uttar Pradesh and raised slogans such as “down with the Indian government” and “give us jobs or kill us”.

Police resorted to baton charging and fired teargas to control the angry crowd.

However, several coaches of a train were set fire in Chhapra in Saran district of Bihar as protests intensified.

“The protesters set fire to a train bogie [coach] in one place,” said Sanjay Singh, additional director general of police in the eastern state of Bihar, adding that roads and railway tracks were obstructed in dozens of places.

Around 22 trains of East Central Railway in Bihar were cancelled and 29 others were affected due to demonstrations.

Under the new plan, around 45,000 to 50,000 soldiers will be recruited annually for candidates aged between 17.5 years and 21 years. Of the total annual recruits, only 25 per cent will be allowed to continue for another 15 years under permanent commission, while others will be let off with skill certificates and bridge courses.

The employment duration has been significantly reduced from up to 17 years for the lowest ranks.

The four-year-stint has effectively made 75 per cent of recruits ineligible for pension, which was one of the main benefits of joining the armed forces for hundreds of thousands of aspirants as it provided social security to those coming from marginalised backgrounds in absence of resources to get degrees for other career options.

The Indian army – one of the world’s biggest with 1.4 million personnel – was one of the main employers in the country. But frustration was already building up as the recruitment process had been frozen for the past two years due to the coronavirus pandemic and aspirants were worried about passing the age limit.

“Where will we go after working for only four years? We will be homeless after four years of service. So we have jammed the roads; the country’s leaders will now get to know that people are aware,” a protestor in Jehanabad, Bihar told Indian news agency ANI.

The new scheme has also triggered a debate among politicians and army veterans, many of whom say that lack of job security can lead to low motivation levels. Additionally, it poses the risk of having thousands of young unemployed youth with arms training in society, potentially causing a law-and-order fallout.

Major General GG Dwivedi in a column in The Indian Express dubbed the Tour of Duty model “tourist soldiering”, and said it is in vogue in the US and the west, where they have “peaceful neighbourhoods with settled borders”.

But the scheme is “flawed and merits a holistic review” as India faces the stark reality of a two-front threat on borders with hostile neighbours Pakistan and China, he said.

Retired Lieutenant General Zameer Uddin Shah said it is a “retrograde step” and “the most detrimental measure inflicted on armed forces”.

“With a year spent on training and six months on pre-release formalities, the soldier will get only 2.5 years to serve, which is inadequate to inculcate regimental ethos, affiliation, and discipline,” the veteran said.

Retired major general GD Bakshi said he was “flabbergasted” by the scheme.

“I thought initially it was a trial being done on a pilot basis. This is an across the board change to convert Indian armed forces to a short tenure quasi-conscript force like the Chinese. For God’s sake, please don’t do it,” he said in a tweet.

“Let’s not destroy our institutions in a time of great threats from China & Pak. Armed forces have performed well. Just for saving money let us not destroy what we have.”