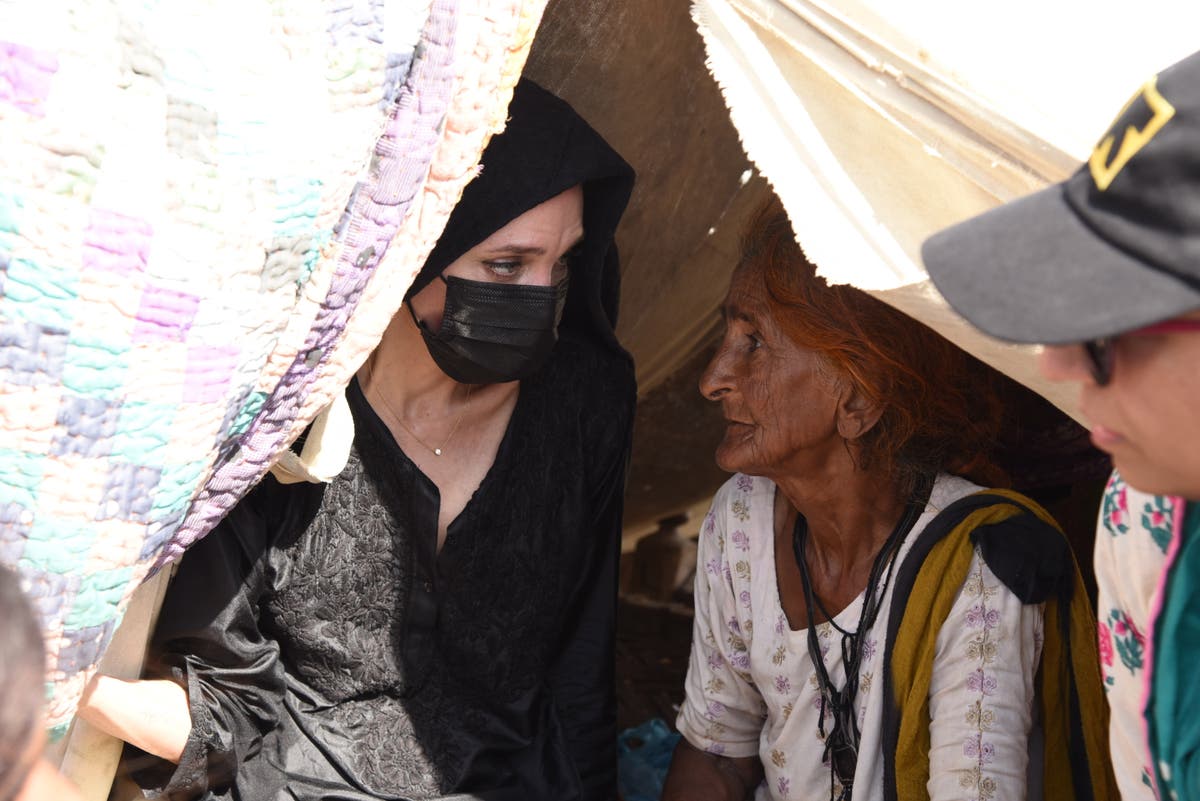 Hollywood star Angelina Jolie has said that she was “overwhelmed” after travelling to Pakistan’s devastated flood zones and meeting with victims.

Ms Jolie, who regularly makes humanitarian trips as a goodwill ambassador for the United Nations High Commission for Refugees, visited the badly-affected southern Sindh province where she met with displaced people living in camps.

“I’ve never seen anything like this,” the actor and humanitarian said on Thursday.

Following her meeting, she said that she felt “overwhelmed” and expressed concerns that if more aid doesn’t arrive, a lot of the victims may not survive.

“I have been speaking to people and thinking that if enough aid doesn’t come, they won’t be here in the next few weeks, they won’t make it,” said Ms Jolie.

The catastrophic flooding has left one-third of Pakistan underwater with officials warning that waters are unlikely to recede for the next six months. The disaster, which has left more than seven million people displaced and impacted 33 million, has been linked to the climate crisis by an international group of climate scientists.

Ms Jolie arrived at an airport in Karachi on Wednesday, the capital of southern Sindh province, where flooding has killed 692 people in the past three months.

She travelled to Dadu, where waterborne diseases have also caused nearly 300 deaths since July, and spoke to people about their needs.

Later at a meeting of civil and military officials in the capital Islamabad, she said: “I am absolutely with you in pushing the international community to do more… I think this is a real wake-up call to the world about where we are at.

“Climate change is not only real and it’s not only coming, it’s very much here.”

The climate crisis has led to catastrophic flooding in the country, with the death toll now at 1,559, including 551 children and 318 women.

According to the International Rescue Committee, a prominent international aid group, Ms Jolie is visiting Pakistan to support communities affected by the devastating floods.

“Ms Jolie is visiting to witness and gain understanding of the situation, and to hear from people affected directly about their needs and about steps to prevent such suffering in the future,” the IRC said in a statement.

“Ms Jolie, who previously visited victims of the 2010 floods in Pakistan, and the 2005 earthquake, will visit the IRC’s emergency response operations and local organisations assisting displaced people, including Afghan refugees.”

The visit comes after Pakistan’s prime minister Shahbaz Sharif travelled to New York for the 77th session of the United Nations General Assembly, where he is set to highlight the damage caused by climate change-induced floods in the impoverished country.

Pakistan has suffered damage worth more than $30bn (£26.5bn) from the flooding, which has been attributed by scientists to the man-made climate crisis.

Pakistan, which has contributed less than 1 per cent of global carbon emissions, is one of the most vulnerable to the impacts of the climate crisis and has demanded rich countries pay climate reparations.

Meanwhile, an outbreak of waterborne and viral diseases such as malaria, dengue fever, diarrhoea and skin infections has overwhelmed the system across provinces as several areas remain submerged. According to the UN, the public health crisis can be a “second disaster” in the country.