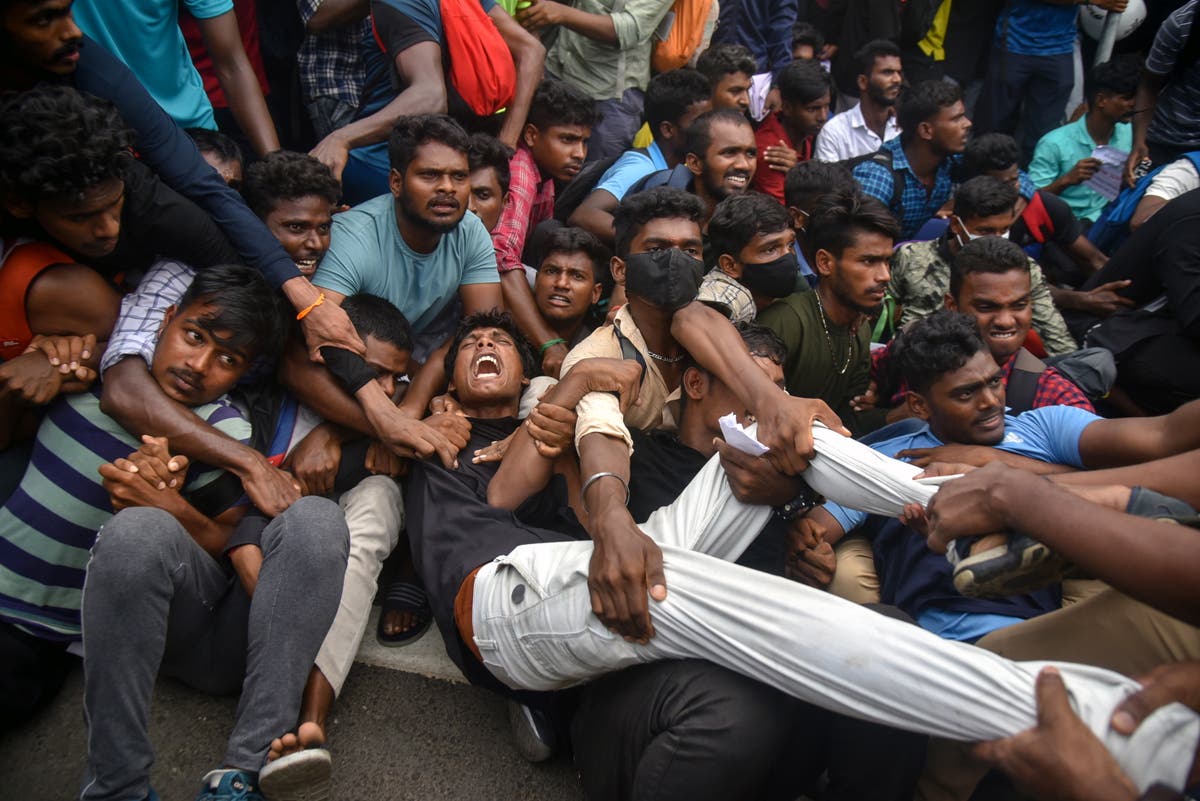 Security forces in riot gear took over major highways, railway stations and cities in India on Monday in anticipation of violent protests against the government’s plans for a major reform of the country’s military.

Protest leaders called for a nationwide shutdown as demonstrations – in which one person has died so far – ran into a sixth consecutive day. Many of the protests have spilled over into violence, with trains set on fire and other government property vandalised.

India’s army is one of the largest in the world and one of the country’s biggest employers, but the Narendra Modi-led government has said too many soldiers are retained as career military men and women, increasing the average age of the armed forces and reducing their combat effectiveness.

Under the new “Agnipath” (path of fire) plan unveiled by Indian defence minister Rajnath Singh on 14 June, applicants between the ages of 17.5 and 21 will be hired into the three services – navy, air force and army – and employed for a four-year “tour of duty” similar to systems in the US and UK. Out of all recruits, only 25 per cent will be retained at the end of these contracts, with the rest leaving employment – one of the most controversial features of the scheme.

But the backlash, from both would-be applicants to the army as well as retired servicemen and women, has been huge. More than 500 trains were cancelled on Monday as heavy police and paramilitary forces were deployed at key points across India, schools were shut down in some cities and internet services were suspended as a precautionary measure. Unions, activists and opposition groups called for a “Bharat Bandh” or all-India shutdown.

Following the violent protests, government and military officials announced a one-time age relaxation in the age limit for recruits, allowing candidates up to 23 years old to apply just this year.

On Sunday the home ministry also said more jobs would be available to recruits under the new system – dubbed “Agniveers” or (warriors of fire) – in the country’s paramilitary forces, with 10 per cent of such vacancies reserved for them.

The federal officials said the new announcements – which were seen as attempts to quell the protests – were planned beforehand and are not concessions.

Launching the scheme, Mr Singh said “efforts are being made that the profile of the armed forces should be as youthful as the wider Indian population.

“This will also lead to the availability of a higher-skilled workforce to the economy which will be helpful in productivity gain and overall GDP growth,” he added.

The plan will reduce the initial contract length of most soldiers from the current 17 years to four. And it has effectively made 75 per cent of recruits ineligible for pension, seen as one of the main benefits of joining the armed forces for hundreds of thousands of aspirants as it provided social security to those coming from marginalised backgrounds in the absence of resources to get degrees for other career options.

The changes will recruit people from “all India, all class” – a major change to do away with caste-, religion- and state-based recruitment into certain regiments of the army, a system which has remained since British rule in India.

It brings more frustration for a generation of young people who aspired to join the military after two years in which recruitment to add to India’s 1.4 million military personnel was frozen.

Critics have said it is a poor time for such a major overhaul of the recruitment process with India facing hightened border tensions with both Pakistan and China.

Sushant Kumar Singh, who served in the Indian army and is currently a senior fellow at the Centre for Policy Research, told The Independent that it could have serious consequences.

“India is on a tough spot geopolitically. To undertake changes at this point and time increases the risks in the sense of what the implications are of these changes,” he said.

“There could have been a prudent time to make these fundamental changes probably when geopolitics was better, the economy was in better shape or society was more stable. Society is in great turmoil here because of the Hindutva ideology targeting Muslims. Unemployment is nearly double-digit and inflation is high.”

Critics also said that the changes were being made to cut army expenditure on ballooning salaries and pensions under the garb of modernisation of the military.

Retired lieutenant general Vinod Bhatia called the changes a “death knell for [the] armed forces … [To date] not tested, NO pilot project, straight implementation. Will also lead to militarisation of society, nearly 40,000 (75 per cent) youth year on year back rejected & dejected without a job, semi trained in arms ex Agniveers. Not a good idea. No one gains.”