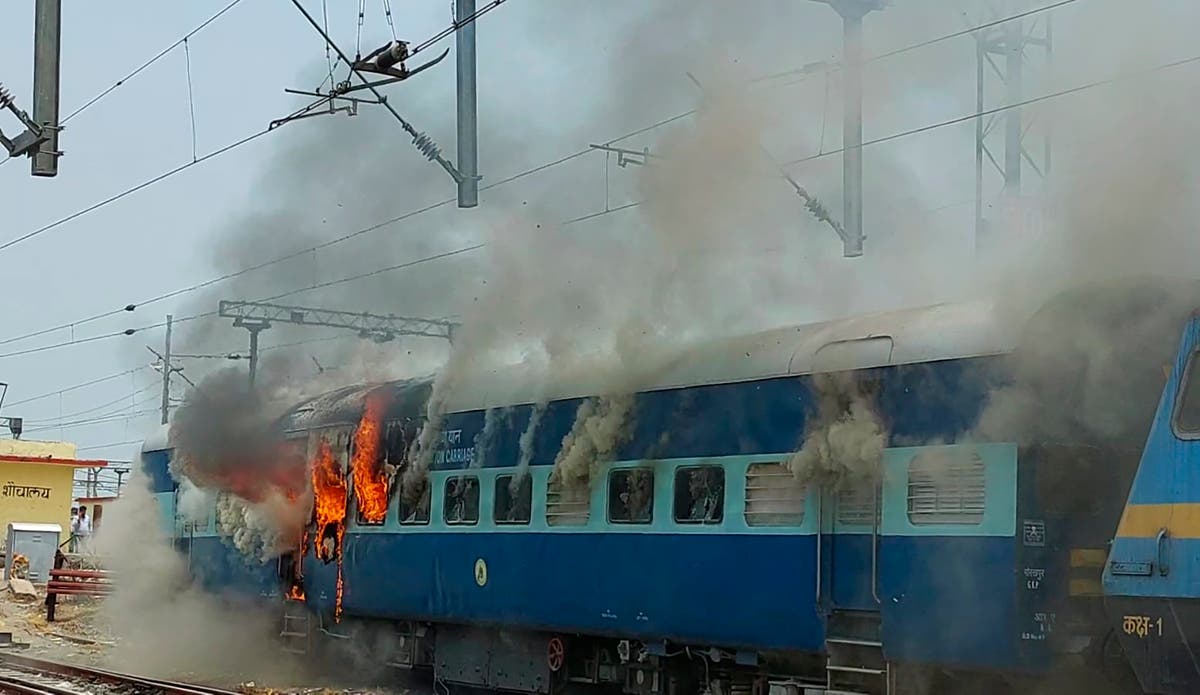 A protester died and several others were injured after police in India’s southern Telangana state allegedly opened fire on them as the country continued to witness anger over recent reforms announced in the recruitment process of the Indian armed forces.

Large scale nationwide protests continued to take place across India for the third consecutive day, leading to violence and trains being set on fire after protesters crowded railway stations.

A train on a railway platform in Uttar Pradesh’s Ballia was set ablaze by a protesting crowd, causing damage to several coaches before police resorted to using force to disperse the crowd.

Police fired at least 10 rounds to control the situation, leaving at least 15 people injured. One of the protesters, identified as Damodar Kumar, succumbed to his injuries, reported the Indian Express.

Eight other injured protesters are receiving treatment at Gandhi Hospital while two remain at the railway hospital.

In the eastern state of Bihar, which is the worst hit by protests, at least two coaches in two different trains were set on fire in the Lakhisarai and Samastipur stations.

A mob outside the house of Bihar’s deputy chief minister Renu Devi attacked her residence and caused damage to property.

“Such type of violence is very dangerous for the society. The protesters should remember that this is a loss for the society,” Ms Devi, who was not at home at the time of the attack, told news channel NDTV.

Section 144, a prohibitory order used often by the government to ban gatherings of more than four people, was imposed in Haryana’s Gurugram, 20km away from the national capital, after a large number of people clashed with police.

On Friday, more than 200 train services were impacted, including 35 trains services cancelled and 13 terminated across the country, according to the Indian railways.

The ongoing demonstrations have forced the government to allow an exemption in the age limit just for this year by increasing the upper limit to 23 years from the existing 21.

Protesters, however, said they want the scheme to be rolled back as it would potentially leave them unemployed.

Defence minister Rajnath Singh, who unveiled the scheme on Tuesday, said the one-time waiver on the age relaxation “indicates that the Government cares for our youth”.

Under the new plan, referred to as the “Agnipath” programme, translates literally to “path of fire”.

Of the total annual recruits, only 25 per cent will be allowed to continue for another 15 years under a permanent commission, while others will be let off with skill certificates and bridge courses.

The contentious scheme has been harshly criticised by army veterans and aspirants for deploying a “hire and fire” culture into the armed forces as they say recruits will end up unemployed after a four-year stint.

The programme was announced despite existing anger as recruitments have been stalled for around two years due to the Covid pandemic, causing frustration among millions of aspirants fearing they might exceed the existing age limit.

The new scheme has not only shortened employment tenures to four years from the existing 17 for the lowest ranks, but has also made 75 per cent recruits ineligible for government pension.

Mr Singh claimed the scheme is needed to make the Indian armed forces battle ready and more youthful, by reducing the average age of personnel over time.

“Agnipath… is a truly transformative reform which will enhance the combat potential of the armed forces, with a younger profile and technologically adept soldiers,” he said.