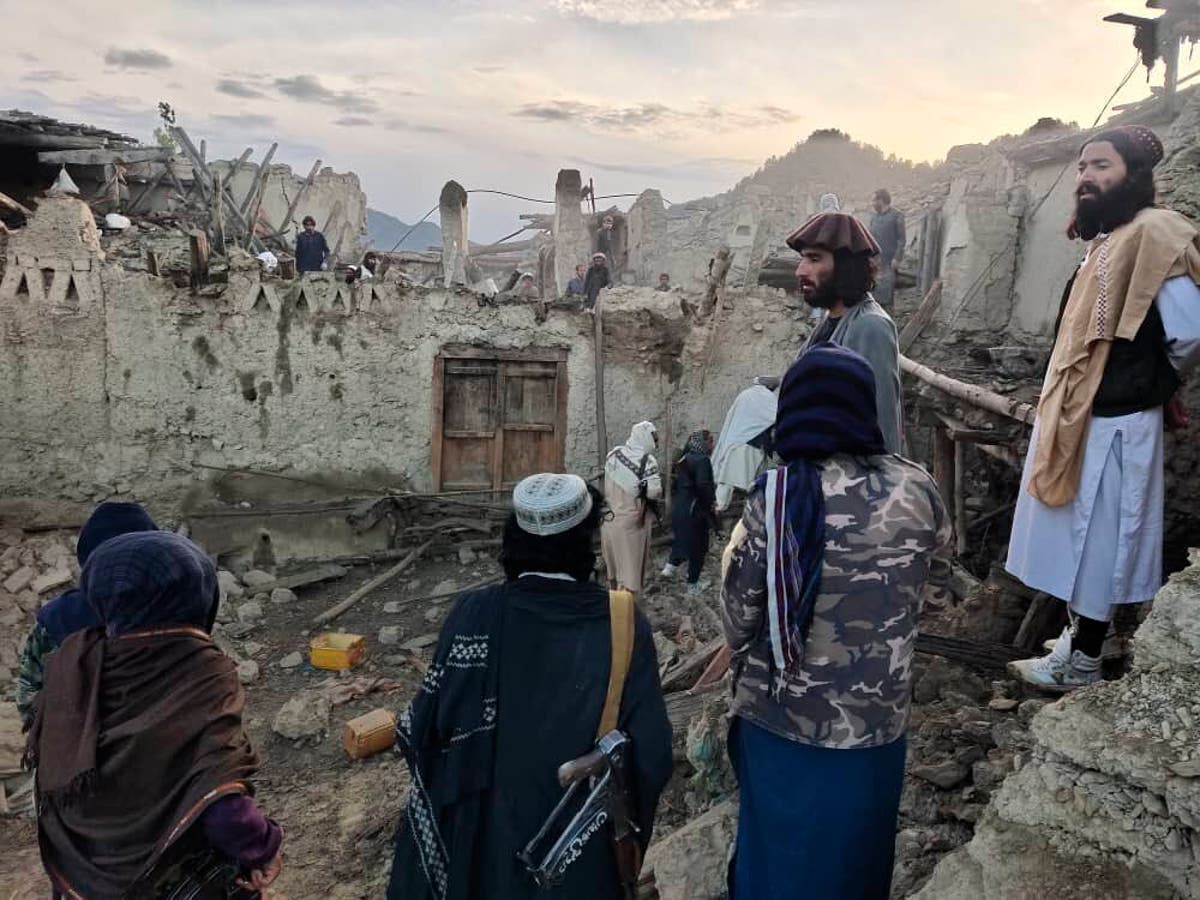 Aid efforts in response to a huge earthquake in Afghanistan that killed at least 1,000 people could become “chaotic” because of the lack of formal government under the Taliban, it is feared.

Houses were reduced to rubble and bodies swathed in blankets lay on the ground after the magnitude 6.1 earthquake rocked Paktika province on Wednesday.

An unknown number of survivors remain stuck under rubble and in outlying areas, health and aid workers said, and rescue operations were complicated by difficult conditions including heavy rains, landslides and many villages being nestled in inaccessible hillside areas.

The death toll is expected to rise as rescue teams search for people buried under the ground. Earthquakes can cause widespread damage in Afghanistan because many dwellings in the countryside are poorly built and lack stable structures.

Aid operations and rescue missions are underway to help those worst affected by the earthquake, although responders are struggling to reach more remote areas.

Dr Orzala Nemat, an Afghan researcher and human rights activist based in the UK, fears that the response could quickly become chaotic without “systematic governance” structures in place since the Taliban takeover last year.

“This is an unprecedented level of crisis in Afghanistan,” she told The Independent. “Afghanistan has had landslides in the past couple of years where we lost a few hundred people. But this is the first time in years that we have had a disaster on this scale.

“Although the UN and other organisations are showing readiness, I’m concerned the situation could become chaotic without those formal governance structures in place.”

The Taliban regained control of Afghanistan in August, following the withdrawal of US and British troops, bringing to an end a two-decades-long western military presence in the war-torn country.

It has since been plunged into crisis as the new Islamist regime struggles to get to grips with food shortages and a flailing economy. More than a third of people cannot meet their basic needs, women’s rights have been restricted and foreign aid has evaporated.

The early morning earthquake struck about 44km (27 miles) from the southeastern city of Khost at around 0130 local time [2100 Tuesday GMT]. Most people will have been in their homes asleep at the time.

Pictures from Afghanistan show some buildings and dwellings have been razed to the ground, while people killed in the earthquake have been wrapped up in blankets.

Reports say that official rescue teams have not yet reached the remote village of Gyan, one of the worst-hit areas.

Helicopters were deployed in the rescue effort to reach the injured and fly in medical supplies and food, interior ministry official Salahuddin Ayubi said.

“The death toll is likely to rise as some of the villages are in remote areas in the mountains and it will take some time to collect details,” he said.

Wednesday’s quake was the deadliest in Afghanistan since 2002.

Mohammad Amin Hozaifa, information and culture director of Paktika, said: “1,000 dead, 1,500 injured, and this number might go up, many families have been lost. Injured people have been taken to Kabul and Gardez.”

Most of the confirmed deaths were in Paktika, where 255 people were killed and more than 200 injured, Mr Ayubi added. In the province of Khost, 25 were dead and 90 had been taken to hospital.

Haibatullah Akhundzada, the supreme leader of the ruling Taliban, offered his condolences in a statement.

Shaking was felt by about 119 million people in Pakistan, Afghanistan and India, the European Mediterranean Seismological Centre (EMSC) said on Twitter, but there were no immediate reports of damage or casualties in Pakistan.

The EMSC put the earthquake’s magnitude at 6.1, though the US Geological Survey (USGC) said it was 5.9.

Adding to the challenge for Afghan authorities is recent flooding in many regions, which the disaster agency said had killed 11, injured 50 and blocked stretches of highway.

Ms Nemat said that the earthquake comes after a series of extreme weather hit Afghanistan, fuelled by the climate crisis.

“If you notice in the past months, multiple climate-related situations have developed in Afghanistan. Due to the heatwave, the forests in Nuristan were on fire. It was not too long ago that heavy rains and floods hit the south and southeast of the country. Every year it seems to get worse.”

She added: “So there is drought happening, there is flood happening and there are also forest fires happening – a very new phenomenon in Afghanistan.”

In response to the Taliban takeover, many nations imposed sanctions on Afghanistan’s banking sector and cut billions of dollars worth of development aid.

Humanitarian aid has continued, however, with international agencies, such as the United Nations, operating.

The UN Office for the Coordination of Humanitarian Affairs (UNOCHA) said Afghanistan had asked humanitarian agencies to help with rescue efforts, and teams were being sent to the quake-hit area.

A foreign ministry spokesman said the Taliban would welcome international help. Neighbouring Pakistan said it was working to extend assistance.

Large parts of South Asia are seismically active because a tectonic plate known as the Indian plate is pushing north into the Eurasian plate.

In 2015, an earthquake struck the remote Afghan northeast, killing several hundred people in Afghanistan and nearby northern Pakistan.

The Independent has contacted the United Nations for additional comment.